'USA Freedom Kids' Manager Is Having Second Thoughts About Trump 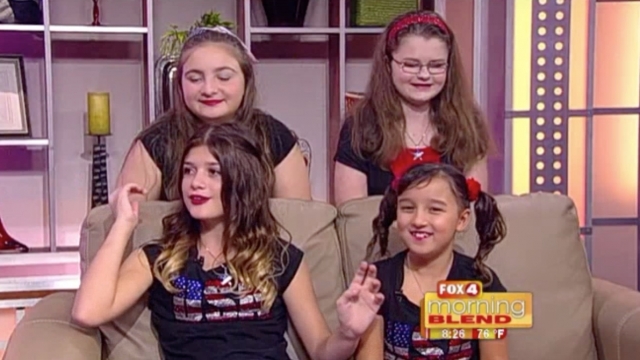 SMS
'USA Freedom Kids' Manager Is Having Second Thoughts About Trump
By Samantha Crook
By Samantha Crook
July 26, 2016
You might remember the performers from a Donald Trump rally in Florida. Their manager is thinking about suing Trump.
SHOW TRANSCRIPT

Some of Donald Trump's most vocal supporters might be changing their tune.

"There needs to be a force of freedom, and if it has to be these cute little girls, than so be it," Jeff Popick told Vice.

You might remember these girls from a Trump rally in Pensacola, Florida, earlier this year. Jeff Popick is the manager of the "USA Freedom Kids" and the dad of one of its members. And he's thinking about suing Trump.

He told The Washington Post they didn't get to sell their CDs at that campaign event and weren't reimbursed for travel costs to an event in Iowa. But talk of a lawsuit is a little surprising given the group's support for Trump in the past.

"He makes us feel safe. And I think he would just be a good president, because he makes America great," a member of USA Freedom Kids told Newsy's partner WFTX.

Popick told The Washington Post: "What he's done to my group or what he's not done for my group doesn't necessarily make him ... the worst candidate. I still have to mull that over. He might still be the best candidate as president of the United States — or not."

SEE MORE: Why A Vocal Democrat Is Predicting A Trump Win In November

Before Popick was plotting a lawsuit against the candidate, he was raising money to help anti-Trump celebrities follow through with their promises to leave the country if Trump were elected.

Popick isn't denouncing the candidate entirely and says considering legal action is about showing the girls right from wrong by holding the campaign accountable.