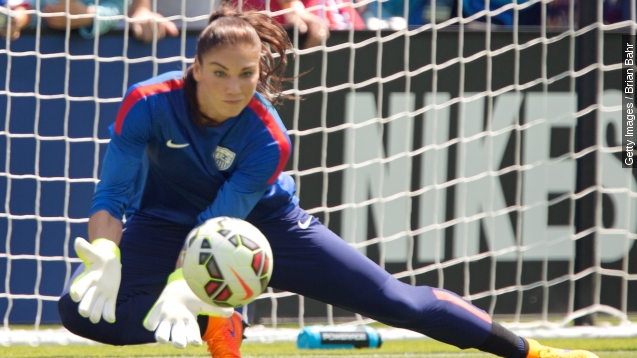 The U.S. Women's National Team faces its first World Cup test Monday, but it's already been dealing with plenty of other tests elsewhere.

At the center of it is goalkeeper Hope Solo. A new ESPN "Outside the Lines" report Sunday brought to light more questions about Solo's domestic abuse arrest last year.

"She grabbed him by the head, and she kept slamming him into the cement over and over again. I came from behind her, and I pulled her over to get her off my son. Once she got off, she started punching me," Solo's half-sister Teresa Obert told ESPN.

The report stirred up enough controversy that Solo skipped the team's media session Sunday night. USA Today writes, "Instead, her coaches and teammates had to fend off questions on her behalf."

"Hope has been fantastic. That was a long time ago. I will be honest, we've moved on. She has been a fantastic player and teammate," head coach Jill Ellis told reporters Sunday.

The only time Solo's really addressed that night was during an ABC interview where she maintained her innocence.

"I was a victim of domestic violence at the hands of my 16-year-old nephew," Solo told Robin Roberts on ABC.

Still, the U.S. women's team is more than just its goalie, and there are plenty of questions elsewhere.

Those questions mainly surround a banged-up offense and how effective a less than 100 percent attack might be.

Alex Morgan is returning from a left knee injury that kept her out of the national team's last three friendlies, including a disappointing 0-0 draw against the Korea Republic last match.

Ellis said Morgan will likely be eased back into things, building up stamina after the lengthy absence.

"It's kind of no looking back now. This is kind of it for us," Morgan told Sports Illustrated.

There's also the question of whether they win the big one. It's been 16 long years since the U.S. last won the World Cup. They've since finished in third twice and were runners-up last year.