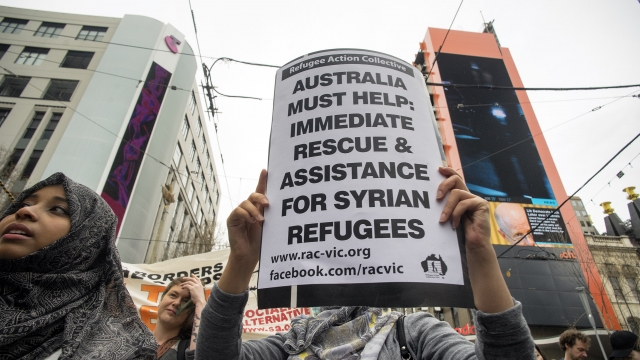 SMS
The US Will Take In Some Refugees Stuck In Australia's Island Camps
By Lindsey Pulse
By Lindsey Pulse
November 13, 2016
The number of refugees the U.S. will take has not been announced, but families will reportedly be given priority.
SHOW TRANSCRIPT

The U.S. has agreed to resettle refugees being held in Australia's controversial island detention camps.

The number of refugees being resettled was not announced, but reports say the deal would be offered first to those who are most vulnerable, particularly families.

ABC reports Prime Minister Malcolm Turnbull also said the deal would apply only to those already on the islands, not new arrivals.

Australia has a strict policy that bars migrants who come illegally by boat from settling in the country. Those that do are automatically placed in detention camps located on several different islands.

Australia's faced a lot of criticism for housing refugees on the islands. Human rights groups have accused the government of ignoring alleged inhumane treatment of the people forced to live there.

Some have suggested people smugglers will use the deal as a ploy to bring more asylum seekers to Australia. But the government warns those seeking refuge by boat will be turned away.

Turnbull didn't say whether the deal had been discussed with U.S. President-elect Donald Trump, only that it was made with the current administration. Officials hope to begin resettling refugees early next year.