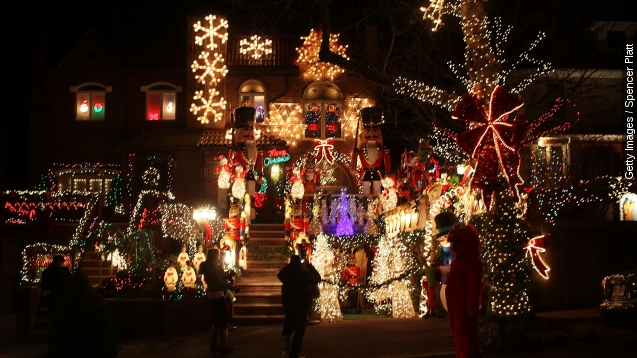 SMS
US Uses More Energy On Christmas Lights Than Some Nations Do All Year
By Ethan Weston
By Ethan Weston
December 26, 2015
The U.S. uses 6.6 billion kilowatt hours to power Christmas lights each year. Countries like El Salvador and Honduras use less than that in a year.
SHOW TRANSCRIPT

Overall, the amount of electricity used to power Christmas lights in the U.S. each year is pretty minimal. Just 6.6 billion kilowatt hours — or 0.2 percent — of our yearly electricity consumption.

But that's more than a lot of countries use in an entire year.

A report on that very subject was recently released by the Center for Global Development.

One of the authors of that report, Todd Moss, talked to NPR, and said he's not trying to ruin Christmas by bringing up the disparity.

Instead, he says he wants to draw attention to the fact that poorer countries are under a lot of pressure to use renewable energy, but their current needs outstrip what renewable energy can provide.

Moss told NPR: "It's pretty rich for me to sit in Washington, D.C., and tell Ghana they can't build one natural gas power plant. ... A country can't become wealthy or even middle class without consuming a lot more energy."

And The World Bank Group backs up the idea that energy equals power. The organization’s data shows that every country with an income per capita above $10,000 uses at least 3,880 kilowatt hours per person every year.