The US Just Ended Syrian Peace Talks With Russia 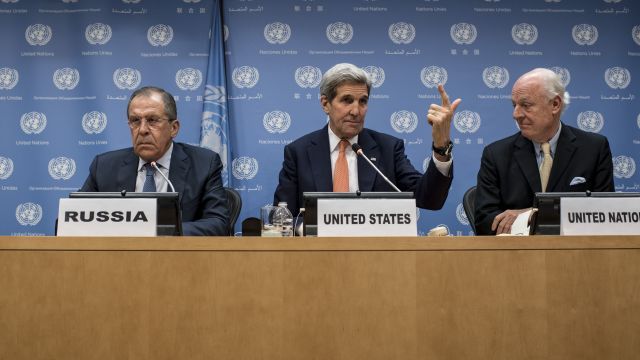 SMS
The US Just Ended Syrian Peace Talks With Russia
By Lindsay Gloor
By Lindsay Gloor
October 3, 2016
The decision was not taken lightly, and the U.S. blames Russia for continuing to cause massive civilian casualties in cities like Aleppo.
SHOW TRANSCRIPT

"What's happening in Syria is tragic, and it is deeply concerning. And it is something that the Russians have been complicit in for a year now," White House Press Secretary Josh Earnest told reporters.

The U.S. Department of State announced Monday that talks with Russia about a cease-fire in Syria will be suspended. A State Department spokesman went on to say the decision was not taken lightly.

He cited both the Russian and Syrian governments' intensified military campaigns, especially in Aleppo, which have led to massive civilian casualties.

Russian authorities responded by criticizing the U.S. decision. Russia claims its involvement in the peace talks is the only way to launch a stable peace process in Syria.

U.S. officials who were sent to Geneva, Switzerland, to work with Russian officials on a Joint Implementation Center — one of the key elements of the now-void agreement — will be sent home.

But Moscow had another announcement to make Monday — Russia is suspending an arms reduction agreement it had with the U.S. to dispose of 34 tons of weapons-grade plutonium.

Russian Foreign Minister Sergey Lavrov said in a statement, "Our decision is a signal to Washington that it cannot use the language of force, sanctions and ultimatums with Russia."

Despite the decisions on both sides, officials said the U.S. and Russia will continue to work together to "de-conflict" Syrian airspace.