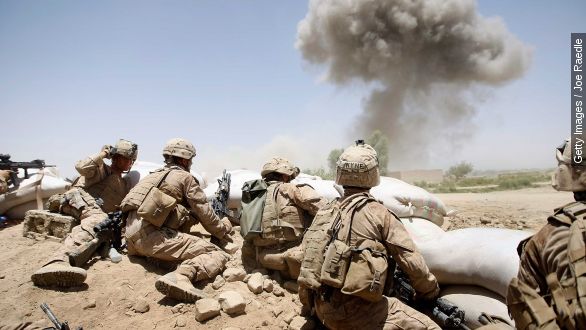 Even as the U.S. mission in Afghanistan winds down, American troops remain targets. (Video via Natalie Skidmore)

On Wednesday, an Afghan soldier opened fire on U.S. forces, killing at least one U.S. service member and wounding two others.

The firefight happened in the eastern city of Jalalabad. It followed a meeting between a U.S. official and a provincial governor.

The shooter was immediately gunned down by American forces, according to U.S. defense officials who spoke with NBC. No word yet on a motive.

The shooting appears to have been a so-called green-on-blue attack — military speak for when an Afghan soldier or police officer turns his gun on coalition forces. (Video via U.S. Department of Defense)

The colors relate to a color-coding system used by the military. Blue represents American forces, and green refers to allied forces.

After more than a decade of war, these insider attacks remain a major problem for the coalition troops training and equipping Afghanistan's security forces. Wednesday's shooting was the second since the start of the year. (Video via U.S. Army)

In late January, an Afghan soldier killed three American civilian contractors at Kabul's military airport. The Taliban claimed the soldier was one of its own who had infiltrated the army.

The Long War Journal, a blog that monitors the global war on terrorism, keeps a running tally on the number of green-on-blue attacks by year.

They began to increase in 2011, and by 2012, they accounted for 15 percent of troop deaths. But since then, the number of insider attacks has declined. ​

The Pentagon and military observers say that's partly due to the changes to recruiting and vetting procedures put in place by the U.S. and its partners — including a so-called "guardian angel" program, which has U.S. and NATO soldiers monitoring Afghan troops. (Video via U.S. Department of Defense)

Counterintelligence operatives have also been deployed inside the Afghan army to weed out soldiers who may have been radicalized.

"I've decided that we will maintain our current posture of 9,800 troops through the end of this year."

This latest attack comes shortly after President Obama announced he would slow down the scheduled troop exit in Afghanistan. (Video via The White House)