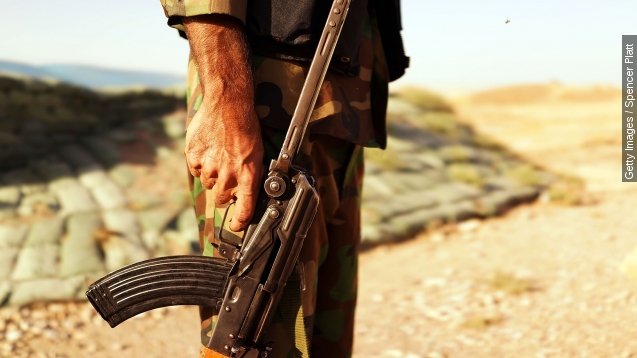 SMS
US Soldier Is The First Killed In Action In Iraq Since 2011
By Bell Johnson
By Bell Johnson
October 22, 2015
The soldier was fatally wounded in a rescue mission that freed 70 hostages from an ISIS prison in northern Iraq.
SHOW TRANSCRIPT

An American solider was killed in an overnight rescue operation that freed 70 hostages from an ISIS prison in Iraq.

He's the first American soldier killed in action in Iraq since November 2011.

U.S. Special Forces have mounted several raids against ISIS in Syria as part of a U.S.-led coalition to fight the terrorist group. In this operation, the first of its kind, they joined forces with Kurdish troops in northern Iraq after receiving information that the captives "faced imminent mass execution."

Details about the operation haven't been released. But Pentagon spokesman Peter Cook said 20 of the prisoners were Iraqi security forces and that five ISIS fighters were captured.

Cook added that several ISIS terrorists were killed in the fight and important intelligence about the group was uncovered.

The White House maintains this operation didn't contradict the president's promise that American forces wouldn't carry out combat missions, since the troops were originally there to assist and advise.

Cook said this wasn't a deviation from the administration's plan: "This was in the national security interest of the United States because this is part of a larger effort against ISIL to support those coalition members, those partners who are in the fight with and who have asked for our help in this unique situation in which the United States was able to provide specific assistance to further this operation."