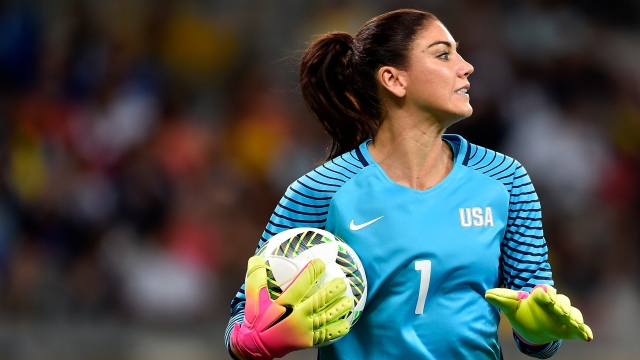 SMS
Hope Solo's Suspension Could Be The End Of Her Run With The US Team
By Grant Suneson
By Grant Suneson
August 24, 2016
U.S. Women's Soccer Team keeper Hope Solo was suspended for six months for calling the Swedish team cowards after the U.S. lost in the Olympics.
SHOW TRANSCRIPT

The U.S. Women's National Soccer Team will be Hope-less for the rest of the year.

Star goalkeeper Hope Solo was suspended for six months for calling the Swedish team "a bunch of cowards" after losing in the Olympics. Her contract with the national team was terminated.

Her comments were apparently the last straw for U.S. Soccer. President Sunil Gulati said the suspension was the right move for the team, especially considering Solo's past infractions.

In 2015, Solo was suspended for a month for acting belligerent during her husband's DUI arrest. She was also charged with domestic violence the year before.

But post-game trash talk netting Solo her biggest suspension yet has some outlets speculating the suspension is really more about the team than Solo.

While Solo's been one of the world's best keepers, she'll be 37 by the time the next World Cup rolls around. Her suspension gives the team a chance to evaluate some future goalkeeping prospects.

The U.S. Women's Players Association said the suspension is "a violation of Ms. Solo's First Amendment rights," and it plans to file an appeal.