US, Russia Agree On Air Safety Over Syria 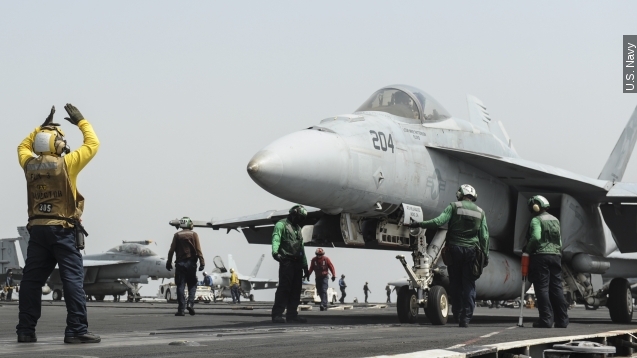 SMS
US, Russia Agree On Air Safety Over Syria
By Bell Johnson
By Bell Johnson
October 20, 2015
U.S. and Russian officials signed an agreement about safety procedures in Syrian airspace. The memo requires communication between the two nations.
SHOW TRANSCRIPT

U.S. and Russian officials have reached an agreement on how to regulate air traffic over Syria. (Video via U.S Department of Defense)

The agreement outlines safety measures of communication and set "safe distances." This comes after a Russian jet fighter flew within 1,500 feet of two U.S. planes over Syria. (Video via Russian Ministry of Defense)

The memorandum, which immediately took effect, requires both sides to maintain "professional airmanship," to set-up a line of communication on the ground and for pilots to communicate over a specific frequency while in the air.

Syrian airspace became more congested after Russia launched its own military offensive in Syria. The Russian government maintains they're primarily fighting ISIS, but their strikes have mostly hit other groups opposed to the Syrian regime. (Video via Russian Ministry of Defense)

The agreement won't do much to soothe U.S. concerns about Russian involvement in Syria. Pentagon spokesman Peter Cook said, "We continue to believe that Russia’s strategy in Syria is counterproductive, and their support for the Assad regime will only make Syria’s civil war worse." (Video via U.S. Department of Defense)

He said the agreement does not include cooperation or sharing information. U.S. officials declined Russia's offer of a more "substantial agreement" to establish joint search and rescue missions in the event aircraft from either country gets shot down. (Video via U.S. Department of Defense)

U.S. officials did not outline the specifics regarding the memo and said it will remain secret at the request of the Russian government.