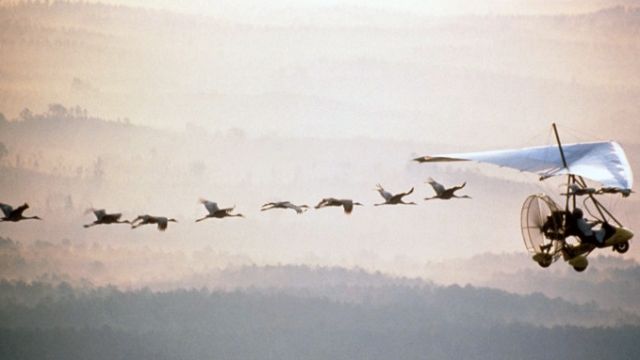 The program helped cranes bred in captivity learn to migrate in the wild, but problems popped up over the course of the program that limited its success — like a lack of parenting skills. (Video via Operation Migration)

Biologists think that, because of all the human intervention, the cranes aren't learning the skills needed to raise their young. Since 2001, only 10 chicks have lived long enough to grow feathers and fly. (Video via U.S. Fish and Wildlife Service)

The ultralight program has its roots in the early '90s when Bill Lishman — one of the co-founders of Operation Migration — helped guide 18 Canada geese across Lake Ontario. The 1996 movie "Fly Away Home" was based on this early attempt. (Video via Sony Pictures)

In 2001, Operation Migration started using what they learned guiding other bird species to help the whooping crane.

The species is still considered endangered, though is making quite a comeback since just 15 birds were known to be living in the 1940s. (Video via Operation Migration)

The Fish and Wildlife Service has proposed new strategies, most of which involve less human intervention, in hopes of allowing the cranes to better reproduce and raise young in the wild.

This video includes images from the U.S. Fish and Wildlife Service / CC BY 2.0.