US Officials: ISIS Bombing Might Have Crashed Russian Jet 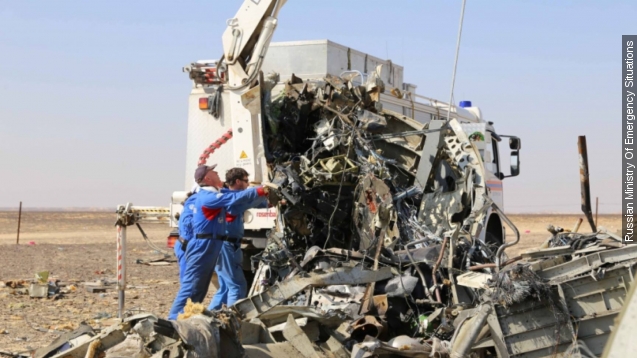 We still don't know exactly what brought down a Russian Metrojet flight over Egypt that killed 224 people. But Western officials are indicating an onboard explosion might be responsible for the crash — which is the last thing Russian and Egyptian authorities want to hear.

Unnamed officials from both the U.S. and the U.K. told news outlets the disaster could have been caused by a bomb planted aboard the airliner. A U.S. satellite recorded a flash of heat near the plane just before the crash, but the plane was flying too high for any terrorist-held surface-to-air missiles in the area to hit it. (Video via ONTV)

An onboard bomb lends credence to the theory that terrorism brought down the plane. An ISIS affiliate in Sinai has claimed credit for the attack multiple times and there's been some evidence of involvement, though nothing is confirmed, yet.

But Egyptian and Russian officials are avoiding any mention of ISIS or terrorism for now; the Egyptian government called those reports "premature." That might be because both governments stand to lose if the crash is linked to terrorism.

An attack on Russian aircraft could dampen domestic support for the country's ostensibly anti-ISIS bombing campaign currently underway in Syria. (Video via Russian Ministry of Defense)

And fears of a similar attack could hit Egypt's vital tourism industry hard. Britain has already halted flights to Egypt and promised to evacuate tourists in the country. (Video via Al Arabiya)

That decision could strain relations between U.K. Prime Minister David Cameron and Egyptian President Abdel Fattah El-Sisi; the two are due to meet tomorrow in London.