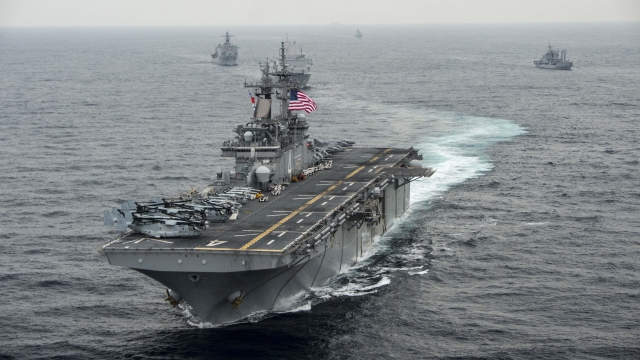 SMS
US, New Zealand Share Bigger Issues Than A 30-Year-Old Nuclear Dispute
By Ryan Biek
By Ryan Biek
July 21, 2016
For the first time in over 30 years, an American naval ship can visit New Zealand.
SHOW TRANSCRIPT

New Zealand's taking another step in cementing the U.S. as not just a friend, but also an ally.

In November, the Pacific island nation will let a U.S. Navy ship visit one of its ports for the first time in over 30 years.

New Zealand became an anti-nuclear country during the 1980s. It started demanding to know if U.S. ships were carrying nuclear weapons before they docked. Since the U.S. liked to stay hush-hush about ships' capabilities, a rift followed.

America said it couldn't guarantee New Zealand's security anymore, as intended by a treaty between the two and Australia. The U.S. considered New Zealand a friend, but not an ally.

Fast forward to 2016, and that nuclear information is now freely available. Plus, the U.S. is thinking more about China's territorial expansion in the South China Sea.

And New Zealand's small and underfunded military is looking for U.S. aid amid growing tensions in Asia.

The timing for the U.S. naval visit coincides with the 75th anniversary of New Zealand's navy.

This video includes clips from Royal New Zealand Navy, U.S. Navy, RT and TVNZ and images from the Department of Defense and Horowhenua Historical Society / CC BY SA 3.0.