US Military Aid To Egypt: Why The Change? 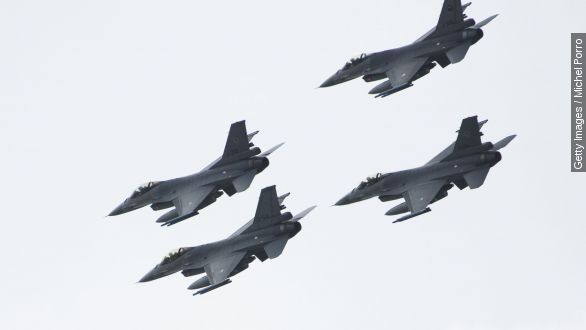 When the White House announced in October 2013 it was suspending significant military aid to Egypt, the purpose was to send a clear message: We don't approve of your human rights abuses.

The Egyptian government is arguably as oppressive today as it was when the U.S. first suspended aid a year-and-a-half ago.

"An Egyptian court has sentenced three Al Jazeera journalists to between seven to 10 years in prison," said someone in a Democracy Now! report.

"A court in Egypt has sentenced 529 from one organization to death," said someone in a Channel 4 report.

"I mean, give me a break. It is the last refuge of an authoritarian, dictatorial regime," said someone in a CNN report.

But on Tuesday, the U.S. announced it was ending the aid freeze, authorizing the delivery of F-16 aircraft and other military equipment. So why the change in tune? (Video via Lockheed Martin)

Developments in the region may have changed the administration's calculus. The U.S. and Egypt are on the same side in the fight against ISIS in Iraq and Syria, and against Shiite rebels in Yemen. In a statement, the White House National Security Council said releasing the aid was in the interest of national security.

But for human rights advocates, that's not enough to justify resuming military aid. Doing so, they say, sends the wrong message: that the U.S. won't always follow through on its threats.

They point to the president's red line against Syria’s use of chemical weapons as another example.

"That would change my equation," Obama said in August 2012.

After Israel, Egypt is the second-largest recipient of U.S. military aid. (Video via Euronews)