US, Mexico And Canada Are Teaming Up To Fight Climate Change 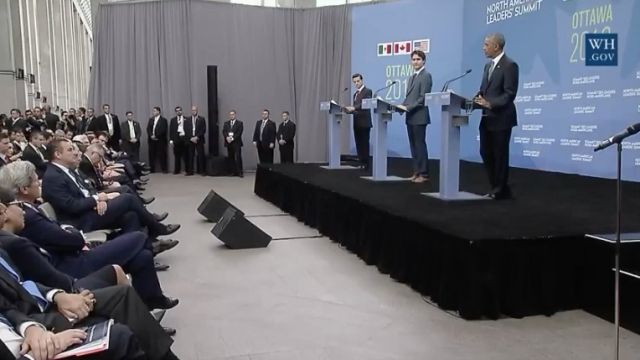 The North American Climate, Clean Energy, and Environment Partnership sets a series of goals for each country to achieve by 2025. All three nations will try to reduce methane emissions by 40-45 percent, use clean power to generate 50 percent of our electricity and improve standards for energy efficiency and vehicle emissions.

The White House says the U.S. is already getting about 35 percent of its electricity from clean power, and that this focus on clean energy production will support more than 1 million jobs.

Renewable energy and energy efficient products, like LED light bulbs, have become more affordable. The lower prices allow more people to use them, reducing our overall energy demand. The more we can do that, the easier it is to reach that 50 percent clean energy goal.

The three leaders also emphasized their commitment to trade among the U.S., Canada and Mexico — something Obama hopes will continue under our next president.

But the meeting of world leaders wasn't without some laughs and an awkward moment. Apparently, handshakes between three people should be choreographed in advance.

This video includes images from Getty Images and video from the White House. Music provided courtesy of APM Music.