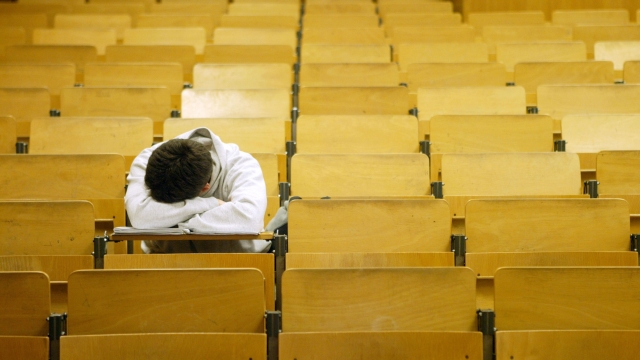 SMS
The US Government Is Expected To Forgive $108 Billion In Student Debt
By Ryan Biek
By Ryan Biek
November 30, 2016
An investigation found that certain student loans cost the government a lot more than anticipated.
SHOW TRANSCRIPT

The federal government is expected to forgive at least $108 billion in student debt in the next few years.

An investigation by the Government Accountability Office looked at the steep rise in students opting for income-driven repayment plans, and how much those loans are costing the government.

In case you're not paying for one of these plans yourself, here's how it works: Instead of paying a fixed rate on your student loans, the amount you pay can be capped at 10 percent of your after-tax income.

Depending on where you work, after 10 to 20 years, whatever debt is left is forgiven.

Of the roughly $350 billion currently owed by people on these income-driven plans, the agency says $108 billion won't be paid off before it's forgiven.

That's about 30 percent of the outstanding student debt.

Supporters of income-driven repayment plans say they help those who are unemployed or don't earn high incomes. The Obama administration has tied the plans to a reduction in new graduates defaulting on student loans.

But the Government Accountability Office criticized the Department of Education, saying it underestimated how much these loans would cost the federal government by billions of dollars.

President Barack Obama has called for a limit on how much student debt the government should forgive. But Congress hasn't voted on his proposal.

President-elect Donald Trump has proposed raising payments to 12.5 percent of income. He's also in favor of setting the forgiveness date at 15 years.