US Fight Against ISIS Stalling Without Iraqi Recruits 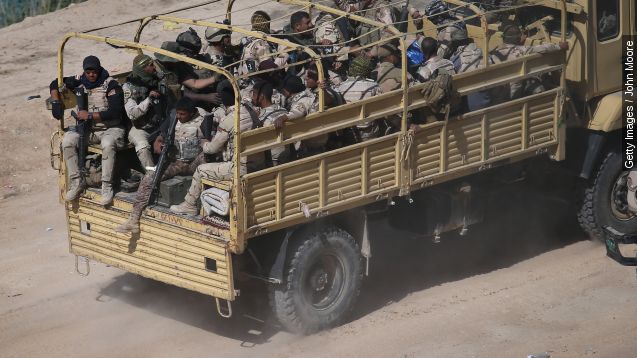 As the U.S. pounds ISIS positions from the air, Iraqi security forces are supposed to be taking the lead on the ground.

That strategy so far has produced mixed results.

Just last month, ISIS militants overran the city of Ramadi. The U.S.-trained Iraqi army — the same army the U.S. spent eight years and billions of dollars on — dropped their weapons and fled. (Video via Al Arabiya)

Last week, the White House announced it was sending an additional 450 troops to a new base in Anbar Province. That makes for a total of 3,550 U.S. troops in Iraq — none of whom are there in a combat role. (Video via U.S. Department of Defense / Army Sgt. William Washburn)

"Expanding our capacity to offer advice and assistance and increase training, not just to Iraqi security forces but also to Sunni tribal fighters in Anbar, reflects the successful implementation of the strategies," White House Press Secretary Josh Earnest said.

Key to the U.S. mission are those local fighters — Sunni tribesmen who have long distrusted the Shiite-led government in Baghdad.

To that end, Carter called for leaders in Iraq to be more inclusive of the country's Sunnis. (Video via Iraqi Ministry of Defense)