US Drawdown In Afghanistan: Putting Troop Levels In Context 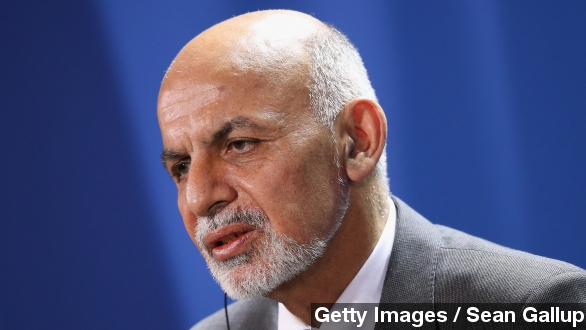 The current U.S. drawdown plan for Afghanistan would cut that number roughly in half by the end of the year before withdrawing completely by 2017. But they could be there a lot longer. (Video via U.S. Department of Defense)

The president announced that a residual force would stick around for a year after the combat mission ended in December as part of a training and support mission and collaborating with NATO. (Video via NATO)

But in light of new regional threats and a more cooperative Afghan leader, the president is reportedly considering changing his withdrawal plans.

So how large a force is that? Well to put it in perspective, 9,800 is smaller than the U.S. presence in Italy or the U.K. — and less than half of the current controversial deployment in South Korea.

The U.S. likes to keep a military presence in former conflict zones, with Germany and Japan being prime examples: U.S. military bases there house close to 100,000 service members combined. (Video via U.S. Department of Defense)

But Afghanistan is, of course, a current conflict zone, and as such, the U.S. troop presence there is the largest of its kind. (Video via NATO)

So if — as an anonymous European official told Fox News — Afghan President Ashraf Ghani wants those troops in Afghanistan "throughout the next decade," there are other factors to consider. (Video via Fox News)

One such factor is the unpopularity of the longest war in U.S. history. A Pew Research Center poll early last year reported a majority of Americans see the war as a failure.

And then there's the danger in the country. 2014 was the deadliest year for Afghans since the conflict started with more than 10,000 civilian casualties, according to the U.N., and more than 4,000 security forces killed. (Video via Al Jazeera)

That's at least in part due to a stepped-up offensive from the Taliban, which has tried to destabilize the country in a year of transitions, Afghan President Ashraf Ghani told CNN. (Video via RT)

"Our enemies were banking on collapse of authority. Because of that, they challenged us. But what I'm gratified to share is during the last six months, the Afghan security forces have really shown their mettle," Ghani said.

Ghani says the Afghan forces are no longer on the defensive and are instead launching their own offensive in the southern Helmand province. (Video via U.S. Department of Defense)

The Obama administration won't want a repeat of the destabilization in Iraq following troop withdrawal there that ultimately gave rise to ISIS, an affiliate of which is now reportedly threatening Afghanistan.