US Director Of Intelligence Expresses Threat Concerns Before Resigning 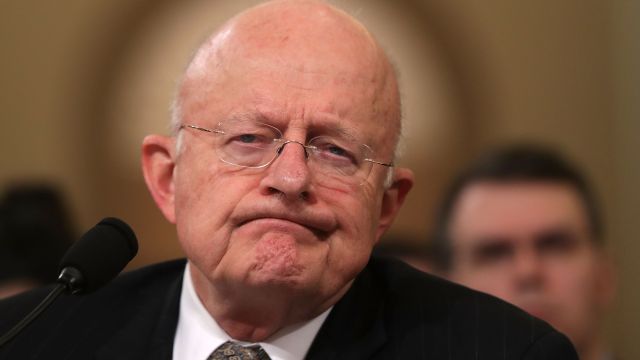 SMS
US Director Of Intelligence Expresses Threat Concerns Before Resigning
By Jamal Andress
By Jamal Andress
November 17, 2016
Clapper touched on everything from ISIS to Russia's apparent efforts to influence the 2016 U.S. election.
SHOW TRANSCRIPT

"Our nation is facing the most diverse array of threats I've seen in my 53-plus years in the intelligence business," said U.S. Director of Intelligence James Clapper.

Clapper announced his resignation Thursday, but not before laying out a long to-do list for whomever President-elect Donald Trump chooses to take his place.

During the hearing, Clapper mentioned everything from ISIS to Russia's apparent efforts to influence the U.S. election.

"We have to be alert to all of these threats. I wish I could rank them and pick and choose which ones to worry about, but unfortunately, they're all a problem for us," Clapper said.

Two new major points of interest for the intelligence community are individual attackers and cyber threats.

"I will leave this job concerned about the impacts of so-called lone wolves and or homegrown violent extremism," Clapper said.

"The internet is insecure, and any time you have a dependency on the internet, we're gonna be playing catch up and reaction," Clapper said.

Clapper is only the fourth director of national intelligence since the position was created in 2005. He also served in the position longer than any of his predecessors, having held it since August 2010.

During his tenure, Clapper drew criticism from both sides of the aisle — especially after Edward Snowden's revelations about the National Security Agency.