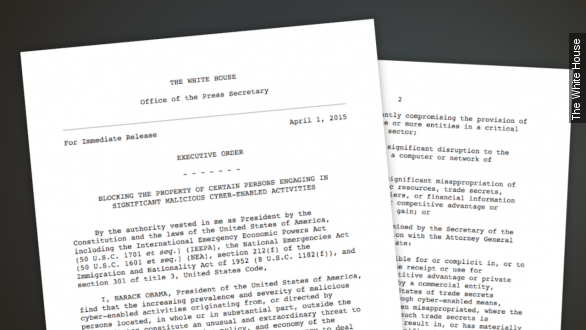 In a letter accompanying the new order, the president explained, "Cyber threats pose one of the most serious economic and national security challenges to the United States."

The order will authorize the treasury secretary to bring sanctions to bear if attacks meet a certain standard of damage to areas such as national infrastructure, the economy or personally identifying information.

“So we’re making sure our government integrates intelligence to combat cyber threats just as we have done to combat terrorism.”

In February, the White House authorized the creation of the Cyber Threat Intelligence Integration Center. The group is intended to organize intelligence and response efforts across the entire government.

Earlier retaliatory sanctions have been on a case-by-case basis, such as those in January against North Korea, which is suspected of being behind the Sony Pictures hack. (Video via NBC)

The idea is to standardize the response to future attacks. In recent months, large-scale cybercrime has compromised millions of customers' identifying information and caused a billion dollars in losses from banks, including some in the U.S. (Video via Bloomberg, Kaspersky)

"The Obama Administration is inventing new authorities to solve these problems rather than using the tools it already has. … The administration's executive order is incredibly broad, addressing attacks against any entity from nuclear reactors to shopping websites."

The White House says it will only be using the order to target "the worst of malicious cyber actors."

Officials told The Washington Post the program does not yet have any specific targets.