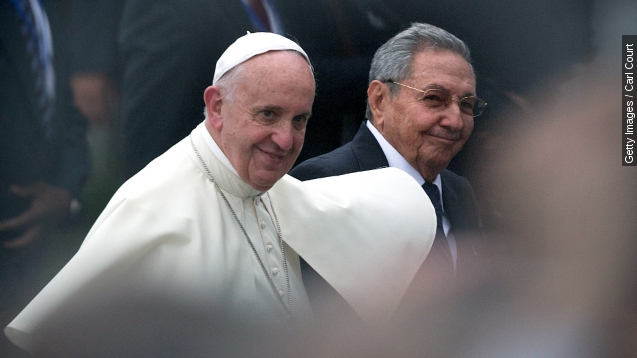 Thousands came out to see Pope Francis in Cuba on Sunday, just days before he'll head to the U.S. The pope held mass at Havana's Revolution Square as part of his 10-day trip away from Vatican City. (Video via Vatican)

The pope arrived in Havana on Saturday and met with Cuban President Raul Castro. Francis praised the thawing of U.S.-Cuba relations, calling it "an example of reconciliation for the entire world" and urged both sides to pursue more constructive talks.

Francis is widely credited with playing a crucial role in the renewed diplomatic relations between the U.S. and Cuba.

Francis reportedly wrote letters to both President Obama and President Castro and held a secret summit between the two sides. Both presidents thanked the pope for his efforts. (Video via CNN / Cubavision International)

"In particular, I want to thank His Holiness Pope Francis whose moral example shows us the importance of pursuing the world as it should be rather than simply settling for the world as it is," Obama said.

Francis will arrive in the U.S. on Tuesday and, on Thursday, will become the first pope to make a speech before Congress. The Holy See's U.S. visit ends Sept. 27.