If This Conflict Bubbles Over, The US Could Be Next To Get Involved 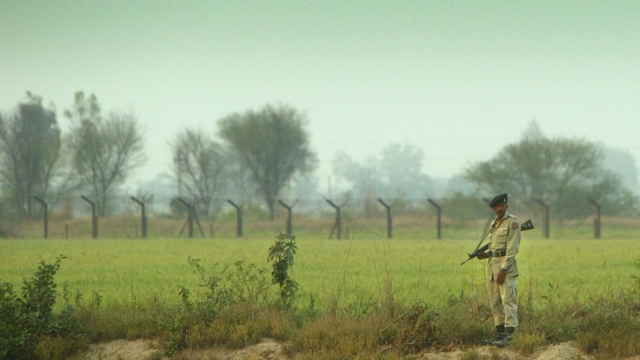 SMS
If This Conflict Bubbles Over, The US Could Be Next To Get Involved
By Melissa Prax
By Melissa Prax
September 22, 2016
Tension in India and Pakistan is rising after an attack on an Indian military base that was blamed on Pakistan.
SHOW TRANSCRIPT

The U.S. has been getting cozy with India. So if India and Pakistan head to war, the U.S. could get involved.

"Pakistan must be dealt a severe and and an uncompromisingly harsh blow," Indian TV host Arnab Goswami said.

After Pakistan was blamed for a recent attack on an Indian military base, Indian politicians and commentators have been glaring extra hard at the border.

And so is the U.S. — or at least two of its congressmen are.

U.S. Reps. Red Poe of Texas and Dana Rohrabacher of California introduced a bill Tuesday that would force the U.S. to answer if Pakistan had supported terrorism.

The Indian military base that was attacked was in Kashmir — a disputed region between India and Pakistan — where violence has been ramping up and statewide curfews have brought areas to a standstill.

Even Russia — one of Pakistan's closer allies — has condemned the attack.

The U.S. bill has more to do with concerns over the government's previous alleged support of Osama bin Laden and terrorist groups than the attack, but the same congressman sponsoring the bill has been outspoken against the attack.

Both India and Pakistan are nuclear powers — which has long made the international community nervous since the two countries combined are home to over 1.4 billion people.

The U.S. told Pakistan it should limit its nuclear program, but Pakistan didn't want to comply unless India got the same warning.

SEE MORE: What Obama And Modi Want Out Of This Week's India Trip

In August, an agreement let the U.S. and India use each other's military bases — further alienating Pakistan, even though at one point the U.S. was dumping a decent amount of money into Paksitan.

Also in August, the Pentagon decided to pause funds intended for Pakistan.

And although it's unclear if India's military will attack, its prime minister does seem to be distancing his government from its northern neighbor.