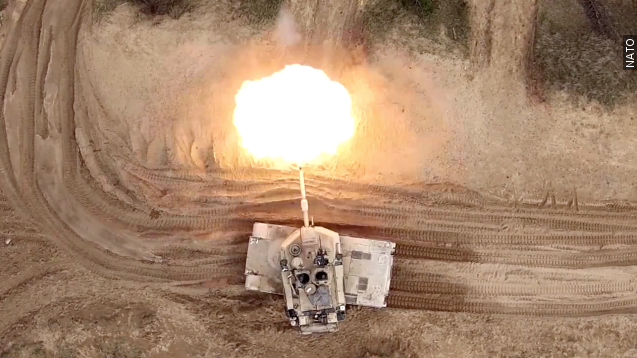 The New York Times says the Pentagon is proposing a plan to station heavy weaponry in Eastern European countries, in a move meant to send a signal to Russian President Vladimir Putin. (Video via U.S. Army)

The Times reports storing battle tanks, infantry fighting vehicles and other heavy weapons would be meant to show Putin and NATO allies, "that the United States would defend the alliance's members closest to the Russian frontier."

The military supplies would be in the Baltic States, Poland, Romania, Bulgaria and possibly Hungary, according to the Times' American and allied sources.

This news comes as the Baltic States become increasingly vocal about their fear of Russian aggression. At the end of May, NATO was considering a request from Estonia, Latvia and Lithuania for thousands of NATO troops to be deployed to protect against a Crimea-like Russian invasion.

And NATO has been conducting joint military exercises in Poland, Lithuania, Estonia and Latvia, in part as a response to increased Russian military activity.

In the Baltic States, that increased military activity has taken the form of flyovers by Russian aircraft. In the last year, NATO pilots have responded to about 150 such incidences over the Baltic.

The New York Times reports some NATO allies are concerned about how Russia would react to the proposal. It would still have to be approved by the Defense Secretary and the White House.