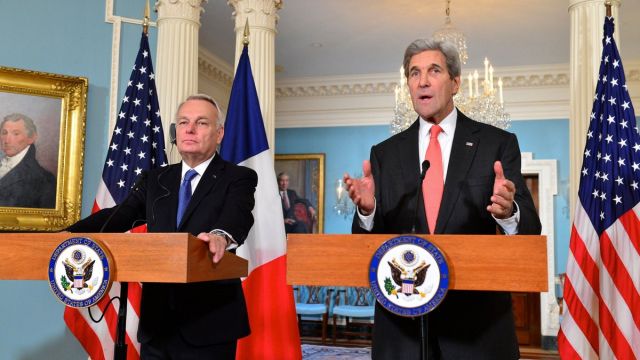 SMS
US Calls For War Crime Probe Following Unprecedented Bombing In Aleppo
By Jake Godin
By Jake Godin
October 7, 2016
A relentless bombing campaign by Russia and the Syrian regime in eastern Aleppo has led to international outcry and charges of war crimes.
SHOW TRANSCRIPT

The U.S. says Russia and Syria should face a war crimes investigation.

Secretary of State John Kerry said the two countries owe the world "more than an explanation" for attacks in Aleppo.

In two weeks of the Syrian regime and Russia bombing Aleppo, at least 376 people have been killed and 1,266 injured, according to the United Nations. More than 100 of the dead are children.

Three of the nine hospitals in eastern Aleppo have been bombed out of service, and three Aleppo-based Syrian Civil Defense centers were bombed.

The U.N. Security Council is set to vote on an immediate truce in Syria. But Russia will likely veto it.