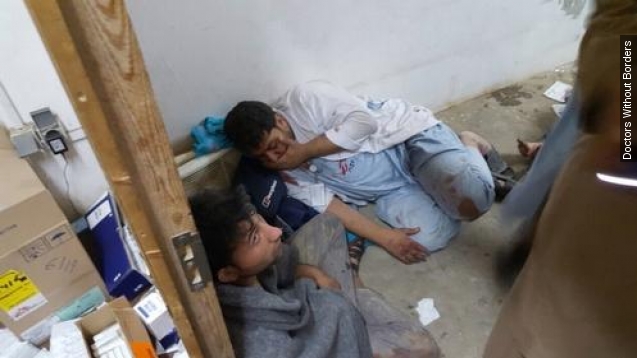 SMS
US Bombing Highlights Human Rights Concerns In Afghanistan
By Kate Grumke
By Kate Grumke
October 6, 2015
U.S. command in Afghanistan will focus on human rights after a U.S. airstrike killed 22 and after reports of covering up sexual abuse.
SHOW TRANSCRIPT

During a Senate hearing on the U.S. airstrike that killed 22 people at a Doctors Without Borders hospital in Kunduz, Afghanistan, the top U.S. commander there said the U.S. never would have bombed a hospital on purpose.

That would be against international rules of war.

Hospitals enjoy a special protected status under the Geneva Convention. The rules are designed to protect people who are not engaged in war, including the wounded, the sick and the elderly, children, and mothers.

But it would have to be deemed intentional to count as a war crime, which an American University law professor told NPR would be "a very, very high hurdle."

That's especially important after a stinging report from The New York Times said that U.S. troops observed Afghan security forces sexually abusing children, but were repeatedly discouraged from reporting it.

But Campbell said since at least 2011, U.S. troops have been encouraged to report human rights abuses.

"We'll do everything within our power to defend and protect human rights. That's our moral obligation to you, the American people, and ourselves, and I've ordered 100-percent training of the force to ensure that they understand our human rights policy," said Campbell.

Together, the airstrike and the reports of covering up sexual abuse add up to a big human rights problem in Afghanistan, which the Pentagon will continue to answer for.

An investigation has been launched into the airstrike, according to the general.