US And Russia Orchestrate Another Cease-Fire In Syria 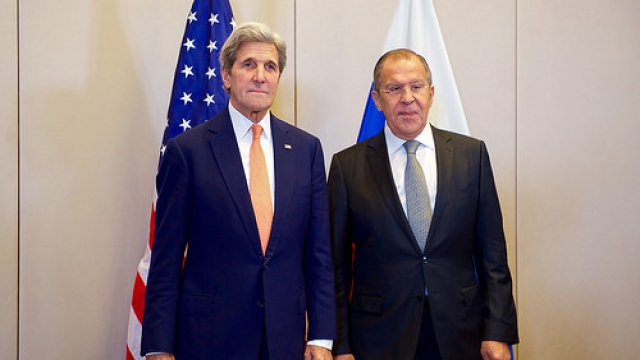 SMS
US And Russia Orchestrate Another Cease-Fire In Syria
By Matt Picht
By Matt Picht
September 9, 2016
If the Syrian regime and opposition can stop fighting for seven days, Russia and the U.S. will start targeting ISIS and al-Nusra together.
SHOW TRANSCRIPT

The U.S. and Russia have brokered yet another agreement aimed at stopping the violence in Syria. And Secretary of State John Kerry is really enthusiastic the plan will work this time.

Kerry told reporters, "We are announcing an arrangement that we think has the capability of sticking, but it's dependent on people's choices. And it has the ability to stick, providing the regime and the opposition both meet their obligations."

If Kerry sounds a bit weary, that's because diplomacy hasn't proven very effective at halting the Syrian conflict. Past agreements have led to brief cease-fires and more humanitarian access, but little else.

The one thing that's changed this time around is Turkey's increased military presence on the ground in Syria, which is bad news for both the Syrian regime and certain opposition groups.

The new agreement calls for a seven-day cessation of hostilities between the regime and the opposition starting Sept. 12, as well as a halt to regime aircraft flying combat missions in opposition territory. The agreement also orders all parties to stop fighting over control of a key road in Syria.

If those conditions are met, the U.S. and Russia will start collaborating on military strikes against ISIS and al-Nusra.