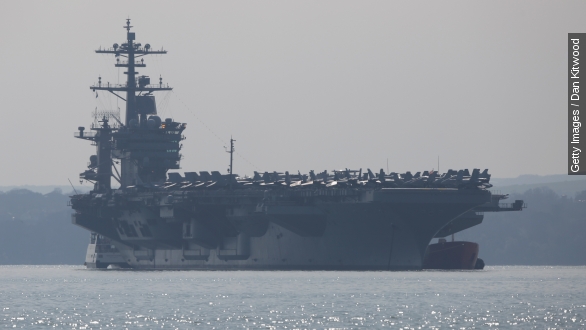 By Matt Picht
April 20, 2015
The USS Theodore Roosevelt is being repositioned near Yemen in response to an Iranian convoy of arms approaching the troubled country.
SHOW TRANSCRIPT

The USS Theodore Roosevelt aircraft carrier, along with the guided-missile cruiser USS Normandy, have relocated to waters outside Yemen and are tracking a convoy of Iranian ships approaching the troubled country.

But the Pentagon quickly denied reports that the warships are on a mission to intercept the Iranian convoy. The ships are officially meant to strengthen the U.S.'s current fleet in the region in response to Yemen's instability.

The conflict in Yemen is increasingly being viewed as a proxy war between regional powers. On one side, a Saudi-led coalition has been conducting airstrikes to quash the Houthi rebel group and restore the now-exiled government to power.

The Houthis are widely believed to be supplied and supported by Iran, though the country has denied the association. But last week, Iran made no secret that it planned to send a convoy of Iranian vessels, some reportedly carrying weapons, to Yemen.

Saudi Arabia and Egypt currently maintain naval blockades around Yemen, but the U.S. hasn't been involved so far. The recent redeployment could mean the U.S. is preparing to take a more active role in the conflict.

A direct confrontation between Iran and the U.S. near Yemen would risk severely damaging the recent framework deal reached by negotiators from both countries on Iran's nuclear program.

It might also complicate the U.S.-Iraq relationship; the country's new prime minister, Haider Al-Abadi, criticized Saudi airstrikes in Yemen during a recent visit to Washington.