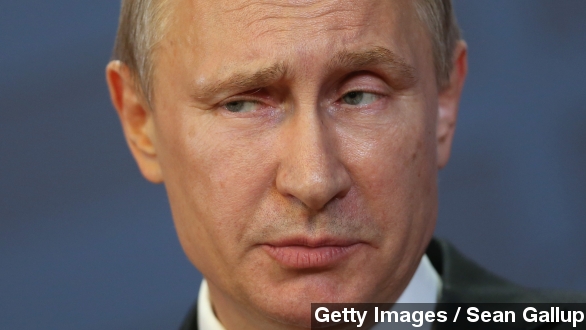 Though it plays more like the trailer for an action movie, this TV spot is actually promoting a new documentary about Vladimir Putin and, specifically, his role in annexing Crimea. (Video via Russia 1)

In the trailer, Putin says Russia had to mobilize to save former Ukrainian President Viktor Yanukovych's life after Yanukovych fled Ukraine at the height of the Euromaidan protests. (Video via CBS)

Yanukovych has since been exiled in Russia and has spoken out against what he calls a coup against him. (Video via RT)

Putin also says he mobilized Russian forces to bring Crimea into Russia, a move that was suspected long before he admitted to doing it in April. (Video via Al Jazeera)

So, while the admissions in the documentary aren't new, Putin speaking so candidly about the annexation presents a contrast with his public denial of involvement in the weeks following it.

In early March of last year, as Ukrainian troops faced off against unidentified militia in Crimea, Putin denied Russian troops were involved and denied Russia had plans to annex the peninsula. (Video via President of Russia)

The documentary shows the latter claim was false as well because the discussions Putin refers to in the trailer — to bring Crimea into Russia — would have taken place in late February. (Video via President of Russia)

Since then, Putin has said the intervention of unidentified Russian troops was necessary to protect the Russian population of Crimea from Ukrainian extremists who never materialized. (Video via BBC)

Putin has similarly denied claims that Russian troops have intervened in the conflict in Eastern Ukraine, despite the similarities between the separatist movements in both cases. (Video via Radio Free Europe/Radio Liberty)

The U.S. and NATO, among others, have both reported evidence of Russian involvement in that conflict.