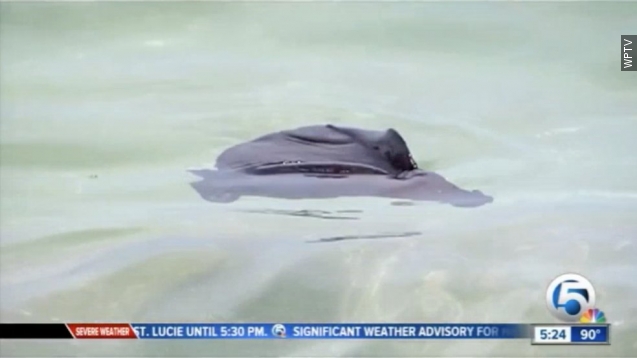 Ever seen this slimy-looking thing before at the beach? Many of these sea creatures have been spotted recently along the Florida coast.

"Essentially they're like a snail without a shell," Dr. Zach Jud from the Florida Oceanographic Society said.

"They're called Atlantic black sea hares and can grow to be a foot long," a WPTV reporter said.

"There were just so many of them, I – we couldn't even count them. ... They're black and kind of slimy," beachgoer Harriet Conn said.

The good news for beachgoers, according to Newsy's partners at WPTV, is that these sea hares are harmless to humans.

Sea hares defend themselves from predators by emitting a purple ink. It's usually their last line of defense.

As for why it's called a sea hare?

"They have little projections on their head that make them look almost like a rabbit," Jud said.

The Florida Oceanographic Society says that because of their extensive neural circuits — interconnecting neurons in the brain that pass messages — sea hares are often utilized in medical research.

It also says anyone who comes across a sea hare washed up on the beach should just scoop it up and put it back in the water.