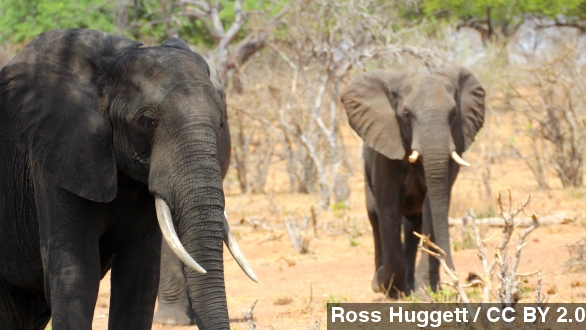 By Sebastian Martinez
August 20, 2014
Poachers have killed 100,000 elephants between 2010 and 2012, as the booming ivory trade takes its toll on the animals in Africa.
SHOW TRANSCRIPT

Poachers killed as many as 100,000 African elephants in the space of three years, according to a new study.

The study found unsustainable amounts of elephants were killed between 2009 and 2012, peaking in 2011 at 8 percent, which translates to 40,000 elephants killed that year alone.

The escalation of poaching, which National Geographic reports has reduced the elephant population in Africa by 64 percent in the last decade, comes with new methods and equipment used by poachers.

CBC: "They were telling me on the ground in Tanzania that people were coming in in helicopters. It is economically viable for them; this is not a fly-by-night operation, so to speak."

​​NATIONAL GEOGRAPHIC: "By every measure, China is the world's villain when it comes to the illegal ivory trade. ... The reasons are obvious: It has a long history of ivory consumption; it has a booming economy."

As The Washington Post reports, prices of ivory have soared in the last five years, starting when the Chinese government authorized a "one-off sale" of ivory, despite signing on to a ban on the international trade of ivory in 1989.

To help stop China's ivory imports, activists have employed one of the country's most famous exports, Yao Ming.

The towering basketball player traveled to Africa and met elephants in a documentary called "The End Of The Wild," which was put together by WildAid.

WildAid is one of a handful of organizations aiming to combat poaching by addressing the consumption of poached goods, such as ivory in China. It's employed Chinese stars Jackie Chan and Vincent Zhao as well as Ming.

WILDAID: "You don't have to play ball to be a great shot blocker. Never buy illegal wildlife products, and we can save our endangered animals. 'When the buying stops, the killing can too.'"

But the buying doesn't look like it's stopping anytime soon, as the study reports preliminary findings showed unsustainable killing of elephants continued in 2013.

This video contains images from Getty Images and Ross Huggett / CC BY 2.0.