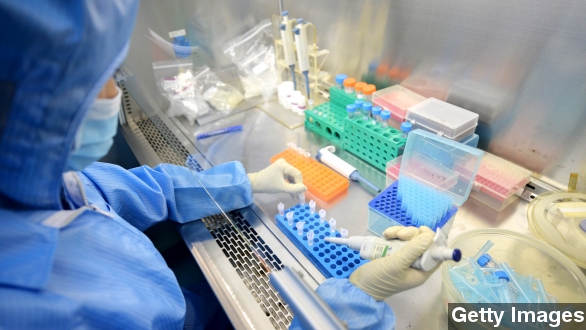 Doctors Without Borders isn't sitting around waiting for a confirmed Ebola cure. While pharmaceutical companies continue to look for the drug that'll stop the epidemic, the nonprofit medical organization has decided to make the unprecedented move of conducting drug trials in the middle of a humanitarian crisis. (Video via BBC)

Doctors Without Borders' announcement Thursday appeared to show the urgency of the epidemic by the nature of its plan. One of the three test sites hasn't even been chosen yet.

Three different research facilities will handle each test site. Two organizations — the French National Institute of Health and Medical Research and the University of Oxford — will test experimental antiviral medications. The Antwerp Institute of Tropical Medicine will test treatments using the blood of people who survived an Ebola virus infection.

But even in announcing such a large endeavor, the doctor who coordinated all these partnerships encouraged caution.

"We need to keep in mind that there is no guarantee that these therapies will be the miracle cure. But we need to do all we can to try the products available today to increase the chances of finding an effective treatment against Ebola."

Doctors Without Borders hopes to start the trials next month with initial results possibly as early as February. Time commented the organization set up the trials with "exceptional speed."

The drug receiving the most publicity to this point, ZMapp, was used on two U.S. patients who contracted Ebola, but their recovery wasn't conclusively credited to the drug. And ZMapp's maker Mapp Biopharmaceutical announced the drug's supply was exhausted in August.

Doctors Without Borders encouraged the makers of all experimental Ebola drugs to keep prices affordable and scale up production right now even without knowing whether the drugs work so if they're successful, they can be distributed immediately.