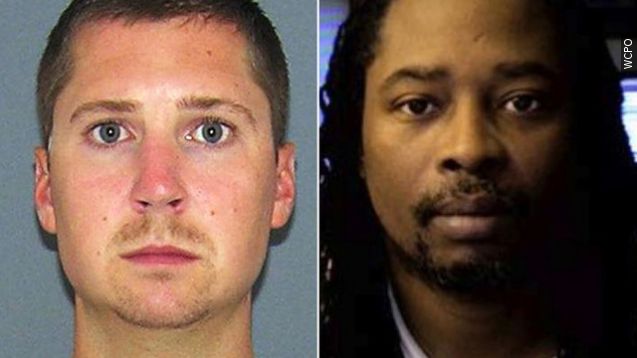 The University of Cincinnati police officer who shot and killed an unarmed man has turned himself in after being indicted by a grand jury on murder charges. (Video via WCPO)

Ray Tensing shot Samuel DuBose during a traffic stop on July 19. In the police report, Tensing said he was dragged by Dubose’s car, but his own body-camera footage proves otherwise. In the video, both men are pretty civil at first. (Video via University of Cincinnati Police Department)

After finding out DuBose doesn’t have his driver’s license on him, Tensing tries to open his door. (Video via University of Cincinnati Police Department)

“OK, well, as far as I can figure out if you have a license or not, go ahead and take your seatbelt off,” Tensing says as he opens Dubose’s car door.

“I ain’t even do nothing,” DuBose says as he grabs the door and shuts it again.

“Go ahead and take your seat belt off. Stop! Stop!” Tensing then draws his gun and shoots DuBose. (Video via University of Cincinnati Police Department)

The prosecutor assigned to the case has called the shooting “senseless.” (Video via WCPO)

Tensing has been fired from the police force and, if convicted, could spend the rest of his life in prison.