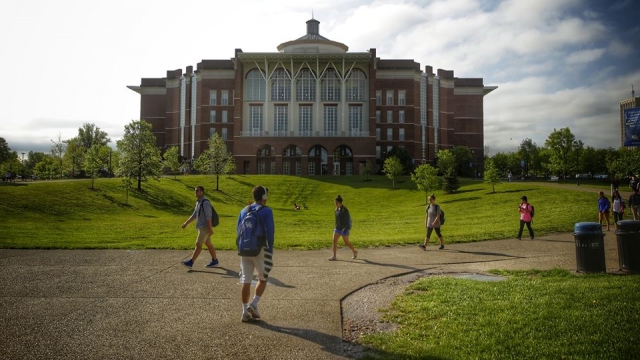 SMS
University Blames Student Newspaper For Drop In Sexual Assault Reports
By Briana Koeneman
By Briana Koeneman
October 31, 2016
The University of Kentucky says students were afraid to report their cases after the paper published stories about a professor's alleged assaults.
SHOW TRANSCRIPT

The University of Kentucky has seen a significant drop in reports of sexual assault on campus. And the college says its student newspaper is to blame.

According to a court filing, officials are pointing the finger at the Kentucky Kernel for publishing stories about an associate professor's alleged sexual harassment and assault of students.

One school official says after the articles were published, students were afraid their own stories would show up in the paper if they reported their cases.

Ashley Rouster from UK's Violence Intervention and Prevention Center said in an affidavit, "Based on my experience in this field, I believe the Kernel's publication of articles related to this case has caused students to be reluctant to report incidents of interpersonal violence for fear of media attention."

But the Kentucky Kernel editor who wrote some of those stories says she's seen the opposite.

She told the Lexington Herald-Leader, "I've had more people come to me to tell their stories because they're distrustful of the university."

The Violence Intervention and Prevention Center says 59 people came forward with reports of sexual assault between July and October 2015, and that number fell to 38 this year.

But the university has seen decreases in sexual assault reports in the past. According to numbers given to the Herald-Leader, a similar drop happened between 2013 and 2014. The cause is still unknown.

The university is suing the Kernel to keep information about the associate professor's sexual assault investigation under wraps.

The university's lawsuit is an attempt to overturn a ruling from the Kentucky attorney general, who ruled the school should turn over redacted documents to The Kernel.