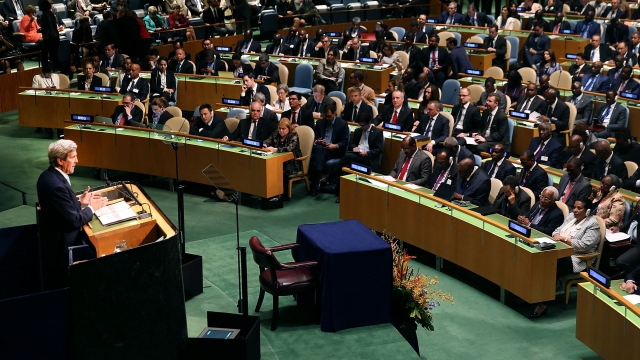 SMS
United Nations Sets Record As 175 Countries Sign Paris Agreement
By Eugene Daniels
By Eugene Daniels
April 22, 2016
It's the largest number of countries to ever sign an agreement on one day.
SHOW TRANSCRIPT

"His excellency, the secretary of state of the United States of America."

Just in time for Earth Day ––

175 countries have signed the Paris Agreement on climate change.

And apparently the event was a family affair.

"These young people are our future. Our covenant is with them," Ban Ki-moon, the United Nations secretary-general, said Friday.

197 kids were at the event to represent the full 197 countries that agreed to the landmark climate deal.

The agreement aims to limit global warming to below 3.6 degrees by 2100.

To become law, the agreement needs to be ratified by 55 countries.

Those countries have to be collectively responsible for at least 55 percent of emissions.

And it looks like it can't happen soon enough.

Data shows 2015 was the hottest year on record.

This video includes images from Getty Images and clips from NASA, United Nations and the U.S. Department of State.