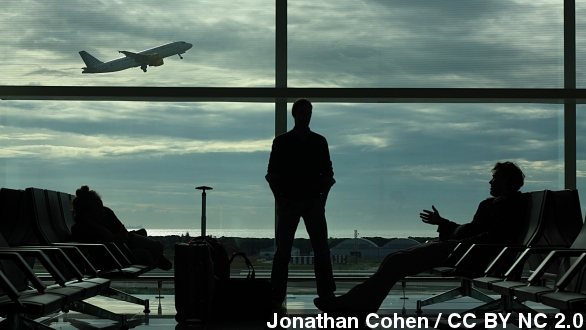 A major airline and a travel site have joined forces to sue 22-year old Aktarer Zaman, the founder of Skiplagged.com.

United Airlines and Orbitz allege that Skiplagged is promoting "strictly prohibited" travel, which they say leads to "logistical and public safety concerns."

If you haven't heard of Skiplagged, the idea is simple: Traveling to a major hub as part of the intermediate leg of a trip can sometimes be cheaper than just traveling to the hub itself.

Boingboing.com gives the example of New York to San Francisco to Lake Tahoe. You book all the way through to Lake Tahoe but deplane in San Francisco. You simply walk away from the last leg of your trip. The term used is "hidden city" travel, and insiders say it's a cheap technique that's been used for decades.

It's the first trick you'll find under "airline booking ploys" on Wikipedia.

But United Airlines and Orbitz have been linked to Skiplagged's website without their permission, which muddies the legal waters.

United and Orbitz say Skiplagged has created $75,000 in lost profits for the two companies due to lost tickets, delay issues from absent passengers and fuel-load miscalculations.

It might be hard for airlines and airline ticket websites to find a sympathetic audience, though.

Airlines made headlines in late 2014 when they announced that, even with dropping gas prices, the savings would not trickle down to consumers. (Video via Fox News)

Competing ticket pricing over the years has created a horde of purchasing strategies for savvy travelers, with sites indicating where, when and how to book the cheapest flights. (Video via Orbitz)

Zaman says he has made no profit from Skiplagged, even though his site has about 200,000 visitors a day. He argues he's merely helping customers to see a current airline ticket pricing tool "inefficiency." (Video via WISC)

This video includes an image from Getty Images and Anne Worner / CC BY 2.0.