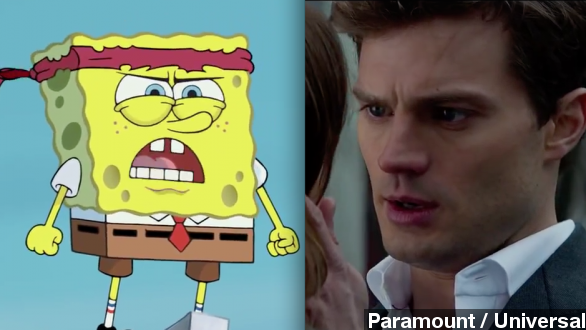 SMS
Unintentional Double Feature: 'Fifty Shades' And 'SpongeBob'
By Lauren Zima
By Lauren Zima
February 17, 2015
At one drive-in, kids watching the new "SpongeBob SquarePants" film can also see "Fifty Shades of Grey" on another screen, and that has parents upset.
SHOW TRANSCRIPT

At a drive-in in the San Francisco area, the new "SpongeBob SquarePants" movie is showing on one screen. "Fifty Shades of Grey" is showing on another. Parents are upset: Kids who are at the drive-in to see "SpongeBob" can see the playroom on the other screen.

Obviously, it's not the kind of playroom they're used to. And local station KPIX is all over the story:

"Most people will likely watch 'Fifty Shades of Grey' in a traditional theater with closed-in walls; some people may even watch it a few months from now in the luxury of their homes on DVD."

But some rebellious, forward-thinking progressives will go see it at a drive-in. (Video via Paramount Pictures / "Grease")

Importantly, I learned today that drive-ins still exist. Who knew?

Seriously though, KTVU talked to one mom who said it was impossible for her kids to not see scenes from "Fifty Shades" as they drove in.

"We had to have our children close their eyes. ... We had to turn around; my children were devastated," Deborah Powell said.

Oh, and for extra clarity on the ratings of the two movies, back to KPIX:

"Obviously 'Fifty Shades' is R-rated, and 'Spongebob,' I'm guessing, it's a kids' film, right? Is it G-rated?"

Which stands for 'restricted,' not restrictions — not bondage.

The company that owns the drive-in didn't respond to requests for comment by KPIX and KTVU, but locals who live near the drive-in noted that it's shown R-rated movies before.

And as a reminder, the "SpongeBob" movie made headlines earlier this month for spoofing the "Fifty Shades of Grey" poster. Maybe they're just meant to be side by side.