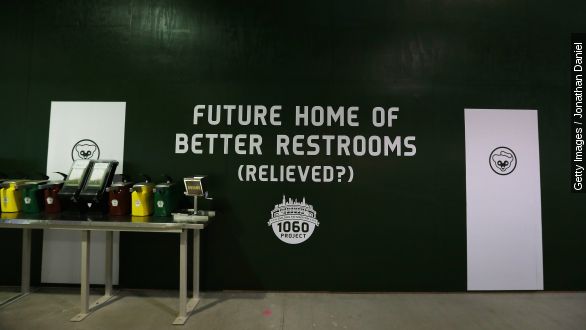 There was a lot of optimism going into the the 2015 season for the Chicago Cubs. A new manager, a handful of budding new prospects, and $375 million worth of renovations to the 100-year-old ballpark.

The jury is still out on the first few, but it's safe to say the $375 million in renovations aren't going as planned.

Things got so bad, some social media posts said people used beer cups, examples from other ballparks of which you can see here, as makeshift urinals.

Bathrooms were the biggest complaint of opening night. Team officials say, in part, due to construction and two upper-level bathrooms going down temporarily Sunday night, fans looking to relieve themselves had looooong waits.

"Every single person I was with was in the same situation and they lost about two to three innings per bathroom break," Cubs fan Russ Stubenruch told WMAQ.

And that wasn't even the only unfinished renovation project the Cubs were forced to deal with.

Days before the opener, the team's iconic outfield bleachers were (and still are) a jumbled mess of construction, not expected to be finished until at least May. So the Cubs have decided to hang banners in honor of the late-Ernie Banks to cover it up. A great tribute, but certainly not what the team had in mind when construction started in October.

Team officials say construction of the ballpark has been delayed due to bitter cold in the winter, when construction crews weren't able to work safely. Work on a water main specifically delayed the right field bleachers' construction. (Video via WFLD)

Add in the Cubs' battle in court with local business owners over their video board, which some rooftop owners said would ruin their views. The Cubs just recently won that battle earlier this month.

The Cubs have apologized for the bathroom debacle Sunday night, saying they would be adding more portable facilities in the near future.