Undocumented Immigrants Are Getting Out The Vote In Arizona 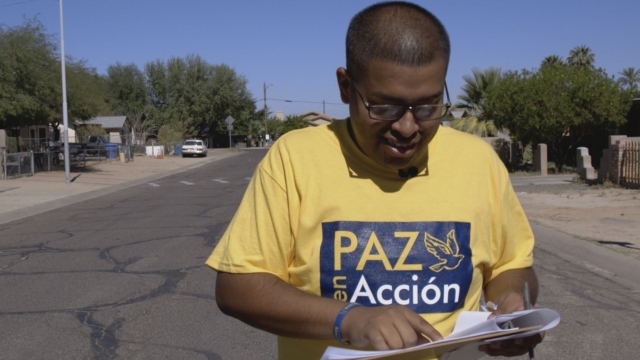 SMS
Undocumented Immigrants Are Getting Out The Vote In Arizona
By Kate Grumke
By Kate Grumke
October 25, 2016
A coalition of groups is working to get Latino voters to the polls as a response to what they say are harsh anti-immigration laws.
SHOW TRANSCRIPT

These undocumented immigrants can't vote. So instead, they're rallying their community to vote.

"Every time someone submits a ballot, by doing this, I'm voting," said Claudia Faudoa, an organizer with PAZ en Acción. "The feeling is amazing because ... I don't have a voice my own. They are my voice."

The growing Latino population could win the Southwest for Democrats.

PAZ en Acción is one of the many groups that's working to get out the vote in the Latino community in Arizona.

Activists in Arizona have created a coalition of get out the vote organizations that have registered more than 150,000 new voters this election cycle. Many of these groups were born as a way to push back against what they say are anti-immigrant policies in Arizona.

"SB1070 was the 'show me your papers' law that created a lot of fear in the beginning in this community," Alex Gomez of LUCHA said.

"What made me get started, back in 2010 when SB1070 started, it was going to impact my family, you know," Jose Miguel Barboza, a volunteer with PAZ en Acción, said.

SB1070 required police to demand papers of people they suspected of being in the country illegally. Activists say the bill resulted in racial profiling by law enforcement.

"There was a 12-year-old kid and he trained me. He was telling me about how his grandfather was deported on a traffic stop, and that's something that I don't want to happen for my family, so I decided to take action and register people to vote," Barboza said.

"The community that stayed and organized completely changed the state," Gomez said. "Our community has learned to fight back. It has learned that we have political power."

This year, getting Sheriff Joe Arpaio out of office is a top priority.

"At the end of the day, keeping our communities safe is the most important thing, and I've done that," Arpaio said.

"We've had our own Trump here for years, and that's been Arpaio," Gomez said. "The community for years is tired of dealing with Arpaio and his racist attacks, racial profiling, misappropriation of funds."

"Being brown in Arizona is hard. We are fighting for dignity and respect, that's all," Faudoa  said.

Nationally, Latinos are one of the fastest growing groups of Americans in the country. In the Southwest, the growing Latino electorate could start to have a big effect on traditionally Republican states, but that all depends on turnout. Latinos register to vote and turnout to vote at much lower rates than other demographics.

These groups in Arizona are trying to change that. In all, they registered more than 150,000 new people to vote. Now, they have to get them to show up on election day.

"All of our efforts right now are get out the vote," Gomez said. "Our communities are paying attention, and us registering them to vote is starting to turn the tide. And the demographic shift is only going to make us a force to be reckoned with."