Under Armour Buying Health And Fitness Apps To Sell Apparel 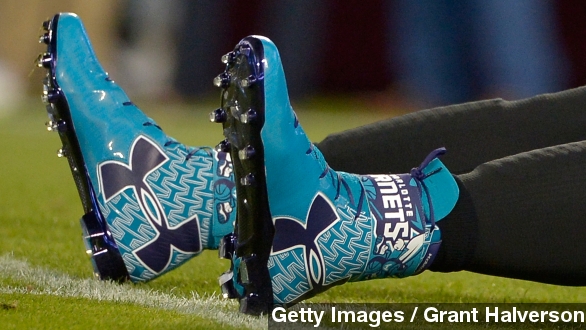 Under Armour is looking to be known for more than its tight-fitting athletic gear.

The company is now diving into the fitness app market by snatching up two fitness-tracking apps Wednesday: Endomondo and MyFitnessPal. The combined purchases cost the company $560 million.

The announcement from Under Armour came alongside its earnings report Wednesday where the company beat analysts' expectations. The athletic apparel giant earned $895 million for the quarter and just over $3 billion for the year.

It's also not the company's first venture into the fitness app market. It purchased MapMyFitness back in 2013 for $150 million.

The move will certainly beef up Under Armour's increasingly aggressive venture into health and fitness apps.

MyFitnessPal boasts some 80 million users, and Endomondo has 20 million. Add those numbers to the 20 million users in 2013 from MapMyFitness, and you're looking at over 120 million people with eyes on those Under Armour-owned apps alone.

And Under Armour just recently launched its own fitness app called Under Armour Record, which allows you to "track, analyze and share your fitness activity" and bills itself as the "world's first social network for athletes and fitness enthusiasts."

The health and fitness tracking market is getting increasingly crowded. Apple debuted its HealthKit with the release of the iPhone 6 last year.

Here's some of the banter from Apple's promotional video:

And then there's the huge market of wearable technology: Fitbit, Nike+ FuelBand, Jawbone and Garmin  — just to name a few. (Video via Fitbit | Nike | Jawbone | Garmin)

But Under Armour CEO Kevin Plank is making one thing clear: The company isn't abandoning the athletic apparel it does so well.

"The more that someone exercises, the more they work out, the more athletic apparel, the more athletic footwear they're going to buy. ... Our goal with all these acquisitions was to sell more shirts and shoes. That's our core business," Plank said in an interview with Bloomberg.

Plank says the acquisitions help give Under Armour a global perspective and touts the company's 120 million users as the world's largest digital health and fitness community.