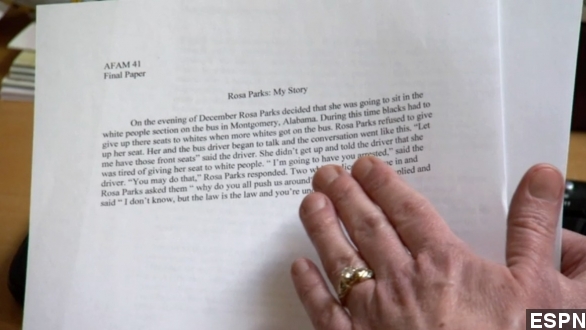 SMS
UNC, NCAA Criticized After Reports Of Academic Cheating
By Christian Bryant
By Christian Bryant
March 28, 2014
Whistleblower Mary Willingham told reporters an athlete at the UNC-Chapel Hill got an A- for a 140-something-word, ungrammatical final paper.
SHOW TRANSCRIPT

The University of North Carolina at Chapel Hill came under more scrutiny this week after reports revealed the possible extent to which university faculty and staff helped student-athletes cheat to get by.

"This is not even close to college work, yet this athlete was awarded an A-." (Via ESPN)

That image seemed to be one of the largest takeaways from an ESPN report. Former UNC student athlete tutor-turned-whistleblower Mary Willingham shows off a 140-something-word essay that Sports Illustrated says was a final course paper.

Not only that, but S.I. contributor Bryan Graham suggests the author of that one paragraph, ungrammatical term paper committed plagiarism. (Via Twitter / @BryanAGraham)

Much of UNC's academic cheating scandal revolves around Willingham, who first blew the lid off the operation in 2011 by finding remarkably low literacy rates among student athletes playing football and basketball — revenue-generating sports.

The solution to help keep players eligible, as told by Willingham and several former players, was to enroll them in so-called "paper classes" within the African-American Studies major.

"Athletes wouldn't ever have to go to class. They would just at some point during the semester be given a prompt to write a paper. and nine times out of 10, they didn't really write the paper." (Via Bloomberg)

Following the "Real Sports" story, UNC released a statement saying they acknowledged "irregular classes" two years ago, conducted reviews and implemented reforms to curb the problem. The statement reads in part, "Our focus is helping students become leaders not only in their respective sports, but also in the classroom and community."

UNC student-athletes reinforced that message Thursday during a presentation at the university's trustee meeting: "Obviously our coaches want us to succeed on the court, but off the court, we have a support staff here like no other." (Via The News & Observer)

But a Businessweek writer says UNC isn't the only institution to blame for students receiving sub-par education. The NCAA recently argued that college athletes should not be paid to play, but would receive scholarships toward free education as compensation.

Using UNC as an example, Paul Barrett writes, "the NCAA’s eligibility rules inspire universities to steer football and basketball players into Potemkin classes that propel athletes to a degree of little use after they graduate.​"

In its statement, UNC officials said they have conducted seven reviews in the wake of the scandal and an eighth is "currently underway."