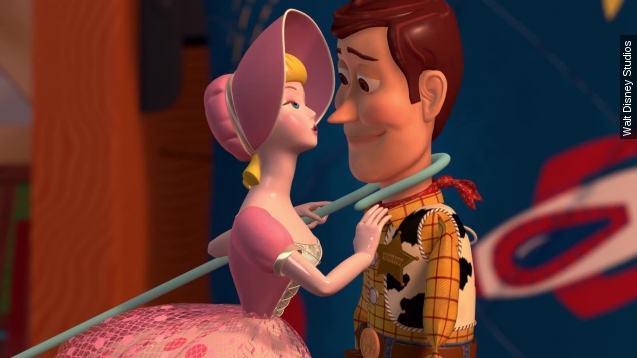 SMS
Unboxing The 'Toy Story 4' Romance Announcement
By Eugene Daniels
By Eugene Daniels
August 14, 2015
The director of "Toy Story 4" announced the movie will center around a love story, instead of the usual buddy comedy we're used to.
SHOW TRANSCRIPT

If you thought you were done crying at a group of animated toys, think again; "Toy Story 4" is officially entering Nicholas Sparks territory. (Video via Walt Disney Studios)

OK, maybe it won't be that dramatic, but the director of the fourth installment told CNBC it will be less buddy comedy, more love story.

"It's a love story with Woody — and this is news ..." John Lasseter told Squawk on the Street.

It's probably for the best that our dynamic duo isn't hooking up, but the return of Bo Peep is a bit of a shocker. (Video via "Walt Disney Studios")

To start off, the sheep herder wasn't really a factor in "Toy Story 3" at all, since she was apparently sold off before the movie even started.

Her disappearance from the series leads us to believe this is probably some kind of prequel to either the entire series or just the third installment. Better yet, Disney could surprise us with the "Taken"-style, get-Bo-Peep-back movie that we never knew we needed. (Video via Walt Disney Pictures, 20th Century Fox)

Given Disney's trend of more central female characters in movies like "Brave," "Frozen"  and "Inside Out," it'll be interesting to see how Bo Peep will make her return.

But I would put money on Woody and Peep getting the happily-ever-after treatment, because, of course ...

"The thing that makes Woody special is that he'll never give up on you. Ever," Andy says of his favorite childhood toy in "Toy Story 3."

This video includes images from Walt Disney Studios and music from Bensound / CC BY ND 3.0.