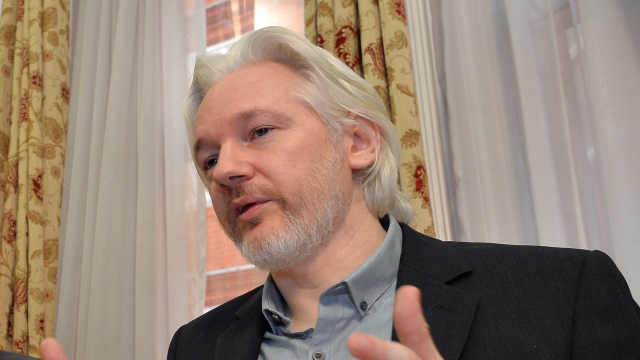 SMS
UN Expected To Vote In WikiLeaks' Julian Assange's Favor
By Melissa Prax
By Melissa Prax
February 4, 2016
Assange filed an appeal with the United Nations, which reportedly found he is being "arbitrarily detained" in the U.K.
SHOW TRANSCRIPT

WikiLeaks founder Julian Assange's stay at London's Ecuadorian Embassy may soon be over.

Assange, an Austrailian citizen, has been at the embassy since 2012 — taking refuge shortly after the U.K. ruled he should be extradited to Sweden to face an arrest warrant for alleged sexual assaults. (Video via TED Conferences)

Multiple outlets say an appeal filed by Assange has been reviewed by the United Nations, which reportedly found that Assange is being "arbitrarily detained" in the U.K. (Video via ABC)

The U.N.'s official decision isn't expected to come out until Friday. If the panel does rule in favor of Assange, that ruling wouldn't be considered legally binding. (Video via RT)

Assange said through his WikiLeaks Twitter page, "I will accept arrest by British police on Friday if UN rules against me."

Police were stationed outside the Ecuadorian Embassy for the majority of Assange's stay, but left in late 2015 after Sweden dropped some of the charges against him.

So how did the U.N. get involved? Assange reportedly submitted the complaint against both Sweden and the U.K. to the U.N. Working Group on Arbitrary Detention in 2014.