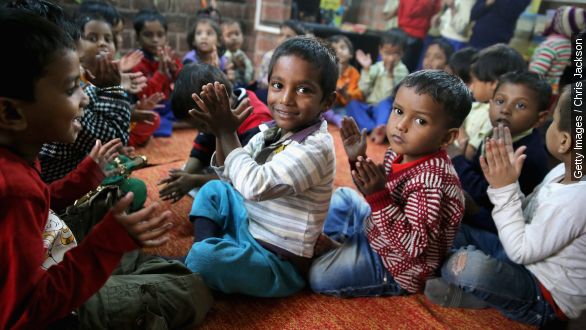 By Jasmine Bailey
April 10, 2015
Results from a 15-year UNESCO program to increase eduction throughout the world, showed about 58 million children don't have access to education.
SHOW TRANSCRIPT

The United Nations Educational, Scientific and Cultural Organization, or UNESCO, released numbers this week on a 15-year program into education trends around the world. And the results were less than satisfactory. The program, called "Education For All," involved 164 countries and was created to get all children into primary school within 15 years — a pretty ambitious goal.

Only about half the countries involved succeeded. But according to UNESCO, there was still "tremendous progress" made.

India was one the countries that made substantial progress. The country made a huge leap from 60 million children out of school in 2000 to one million today. Not only that, but boys and girls have equal access to education.

UNESCO notes an increase of availability to paved roads and electricity in rural areas contributed significantly. But the there were also some challenges.

BBC reports, "As well as lack of funding, barriers to the creation of primary places for all included conflict, poverty, discrimination, poor governance, corruption and rising population." And as expectations grow higher, more funding will be needed.

"As many as 58 million are still out of the classrooms around the world. New education targets are now being set for the year 2030. UNESCO says an extra $22 billion would be needed annually," Al Jazeera reports.

And as those next targets are set, there's a much deeper issue — not just being in school, but actually learning.

"The levels of learning are actually incredibly low. They're possibly getting poorer. And there is this rapid growth of the private sector, which in itself isn't necessarily a bad thing but has some serious equity concerns," Abhijeet Singh from Oxford University told BBC.

However, there is still something to be said about children being in school, as researchers say it is an important first step to eventually providing an education for all children across the world.