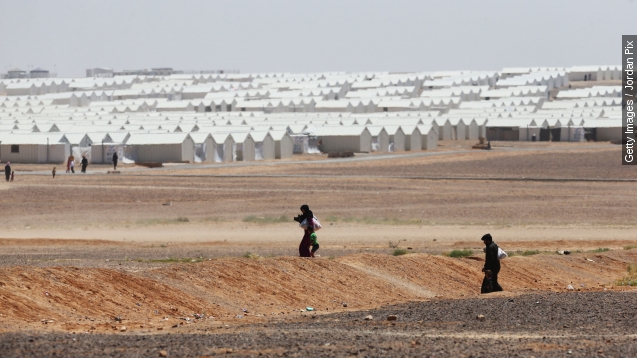 The U.N. and other human rights groups have called on Jordan to admit more Syrian refugees, saying 12,000 stranded people are congregating along the Jordanian border.

Already the country has admitted more than 630,000 Syrians, about a tenth of its own population, since the start of the civil war in Syria. (Video via UNHCR)

But the U.N. Refugee Agency says the country should take in more, especially since the number of refugees has tripled since the beginning of November. (Video via UNHCR)

At least 11,000 refugees have gathered in the demilitarized zone along the border, which is fully exposed to the sun and lacks access to water. The other 1,000 are camping out in another location nearby. (Video via UNHCR)

UNHCR spokesperson Melissa Fleming said in a press briefing, "If refugees are not admitted to Jordan and substantial assistance not provided, the lives of refugees will be at risk in the coming winter months." (Video via UNHCR)

Yet, he did say the country had a right to screen those attempting to cross the border because of increased security concerns. (Video via Al Jazeera)

The UNHCR said it would be willing to help upgrade Jordan's security and contribute more support. The group has also acknowledged the country's security concerns and commended them on their help housing refugees thus far. (Video via UNHCR)