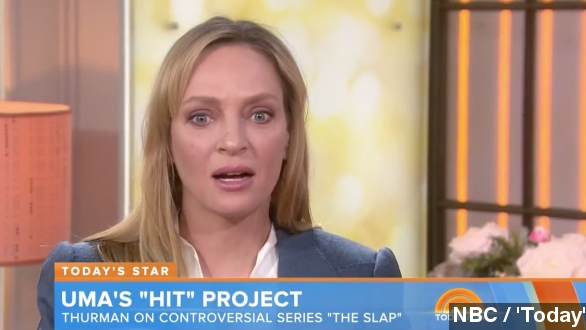 SMS
Uma Thurman Responds To Red Carpet Pics: 'I Look Weird'
By Lauren Zima
By Lauren Zima
February 12, 2015
The actress appeared on "Today" and talked about her red-carpet look from Monday night. Some called it "shocking," but she laughed it off.
SHOW TRANSCRIPT

Uma Thurman spoke out on the "Today" show Thursday about the backlash over her latest red carpet look.

"I guess nobody liked my makeup. I mean, I've been doing this for years and years and years; people say things nice and they say things mean. It's just like, 'Whatever.' ... You take the good with the bad," she told Savannah Guthrie.

The Internet was temporarily obsessed with photos of the actress from the premiere of her new NBC show "The Slap" on Monday night. She was trending on Twitter as words like "shocking" and "unrecognizable" were used in headlines.

We kind of loved Uma's facial expression as the photos were brought up again on NBC Thursday. She did admit, "I look weird." So Uma gets that something was amiss ...

But the reaction was all very reminiscent of the Renee Zellweger drama from October, when she appeared on the red carpet looking different. Renee still looks different, though — Uma looked very much herself on the "Today" show.

Uma's makeup artist explained the look Tuesday, saying the pair wanted to try a new look for Uma. He used a pencil to make her eyebrows more bold and lifted, and went with no mascara and a strong lip color.

You can see Uma looking just like her beautiful, usual self on her new NBC show "The Slap." It premieres Thursday night.