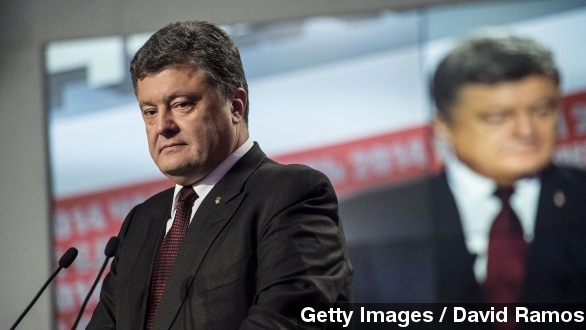 Ukraine's official parliamentary elections took place last week, and the mostly pro-European results were generally heralded as a landmark moment for democracy in the country.

But some parts of Ukraine are hosting another election Sunday — and the reception to these polls has been less than welcoming from the West.

Two self-proclaimed "People's Republics" surrounding the eastern Ukrainian cities of Donetsk and Luhansk will be holding their own elections, in an effort to legitimize their breakaway movements.

Established separatist leaders are expected to claim an easy victory against candidates who are virtual unknowns. The polls aren't expected to have much standing outside of separatist territory — Russia is the only major power which will recognize the results.

Now, depending on which side of the conflict you get your news from, these elections are either a vital show of public support for the popular uprising against Kiev, or a slapdash facade of democracy meant to mask Russian meddling in Eastern Ukraine.

But Russian media has characterized the elections as well-run and above-board, with an eager electorate voting in spite of Kiev-backed sabotage efforts.

The elections are likely to drive a fresh wedge between Kiev and Russia, coming just days after the two countries signed a deal to keep Ukraine supplied with natural gas, a small step towards closing the deep political rift between the nations. (Video via Voice of America)

And the latest show of defiance could also have dire consequences for the already-shaky cease-fire agreement between Ukraine and the separatists. Reports of patchwork fighting between the two sides have increased in recent weeks.

The Nation says Kiev's newly elected government might be less tolerant of the rebels, calling the election "a referendum on [Ukrainian President] Poroshenko’s decision to halt the military campaign. ... The results must be disappointing to the supporters of peace."

The Ukrainian conflict has killed over 3,700 people since fighting first began six months ago. The original cease-fire agreement permitted Donetsk and Luhansk to vote in nation-wide local elections on Dec. 7.