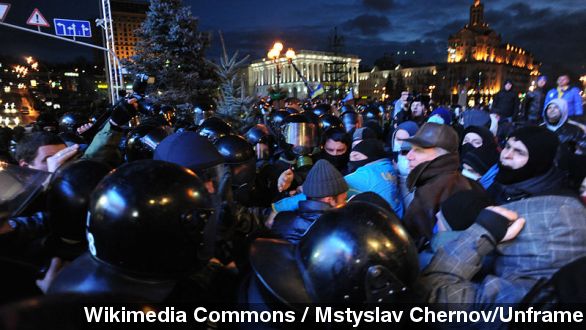 Protesters in Ukraine's capital say they now have full control of the city.

Just 24 hours ago, Kiev resembled a war zone. But listen to how reporters from Channel 4 and the BBC reporter describe the scene now. (Via ITN)

"Now look at the streets, its been swept clean. There’s an amazing kind of domesticity of this place. The barricades are swept with almost Swiss like precision." (Via Channel 4)

"It does feel now that there’s been some sort of regime change. No sign of President Yanukovych." (Via BBC)

These developments come not long after he and the opposition agreed to a Western-brokered truce, following 20 hours of non-stop negotiations ending Friday. (Via Euronews)

Under the deal, Yanukovych is stripped of some of his power, a constitution drafted in 2004 is restored, and he's agreed to early elections. (Via Wikimedia Commons / Dzhygyr Anatol)

But because Yanukovych does remain in power under the deal, many in the opposition have rejected it — calling for the his resignation letter instead.

The calls for his removal has been ongoing since November. The protests initially started over Yanukovych’s last-minute decision to ditch an association agreement with the European Union, in favor of a deal with Russia. (Via CBS)

Since the protests began three months ago, 77 people are said to have died.