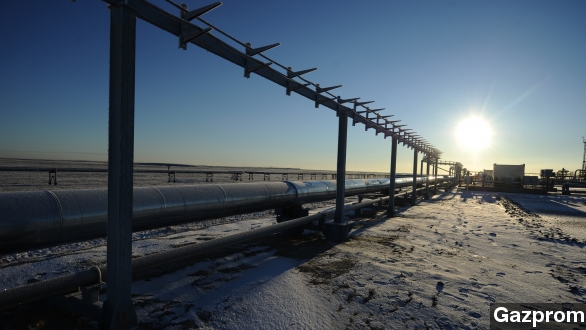 Ukraine's got a gas problem.

Fighting might be coming to an end in Ukraine as pro-Russian separatists and the government withdraw their heavy weapons from the front lines, but Ukraine now has a new problem: gas. (Video via Ukraine Ministry of Defense)

The issue here, according to Gazprom, is money.

Gazprom says Naftogaz hasn't fully paid for its March gas delivery. Although Naftogaz made a prepayment of $15 million on Friday, Gazprom's spokesman told RT that's only enough for one day of gas.

Without a full payment, Gazprom is warning Naftogaz it'll have to cut off Ukraine's gas.

For its part, Naftogaz says Gazprom breached a trilateral, multibillion-dollar Brussels deal made last October between Ukraine, Russia and the European Union in order to secure a winter gas supply for Ukraine until the end of March of this year.

Naftogaz claims Gazprom has been shorting it on gas since Feb. 22, only delivering around 40 percent of what Naftogaz paid for in the Brussels deal.

"Gazprom is trying to cut the gas supply to the E.U. to make sure that Ukraine will not be able to source enough gas from that market," Naftogaz CEO Andriy Kobolyev said.

So there's a little bit of a back-and-forth going on here — not exactly unusual in anything related to talks between Ukraine and Russia. But a gas standoff could prove to be problematic for the European Union.

That's because Europe gets around 30 percent of its gas from Russia — and about half of that gas sent to the E.U. from Gazprom came through Ukraine in 2013.

Still, this isn't the first time a gas standoff has occurred between Ukraine and Russia, and Ukraine has other options including its own stockpile of gas and buying gas from Europe. (Video via Ukraine Today)

New trilateral gas talks between the E.U., Russia and Ukraine are set to begin Monday.

This video includes images from Getty Images, Thawt Hawthje / CC BY 2.0 and Gazprom and music from Chris Zabriskie / CC BY 3.0.