Ukraine's Army Is Outgunned And Underfunded 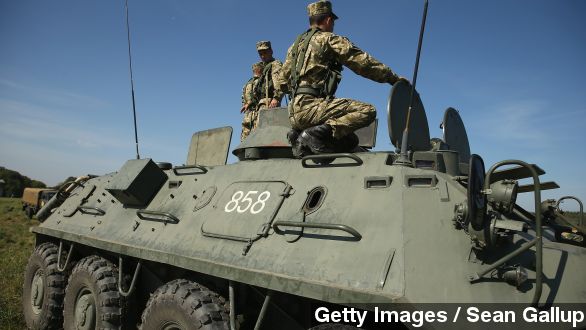 The Obama administration is reportedly considering arming Ukraine. The reason? (Video via Ukraine Ministry of Defense)

Putin is winning. (Video via Kremlin)

Or at least the pro-Russian rebels fighting in Ukraine are: the ones Russia's president claims aren’t supported by his government, despite plenty of evidence suggesting otherwise. (Video via YouTube / 1stVideoChannel)

It's now all-out war in eastern Ukraine. In recent weeks, the separatists have made major gains in areas held by the military.

And now, the rebels are closing in on a major railway hub in the Ukraine-controlled town of Debaltseve. Thousands have fled their homes. (Video via Радіо Свобода / Військове телебачення України)

On Monday, the rebel leader in Donetsk said he planned to increase his forces to 100,000 men to take on Ukraine's ill-equipped and underfunded military. (Video via CCTV)

So underfunded that last year, the Ukrainian army resorted to a text-message campaign to raise donations.

This year, Ukraine plans to spend over $5 billion on its military and law enforcement. (Video via Ukraine Ministry of Defense)

By comparison, Russia's defense budget for 2015 is $81 billion. (Video via Kremlin)

Currently, the U.S. provides only nonlethal aid to Ukraine, like body armor, first-aid kits and radar technology. Lethal aid could include anti-tank and anti-air systems and armored Humvees.

Getting a lot of attention is this February report from a group of eight high-ranking former U.S. officials. It recommends direct U.S. military assistance in Ukraine to deter further Russian aggression.

The question is: Would that provoke Putin? (Video via Kremlin)

This video includes an image from Getty Images and Kevin MacLeod / "Drums of the Deep."