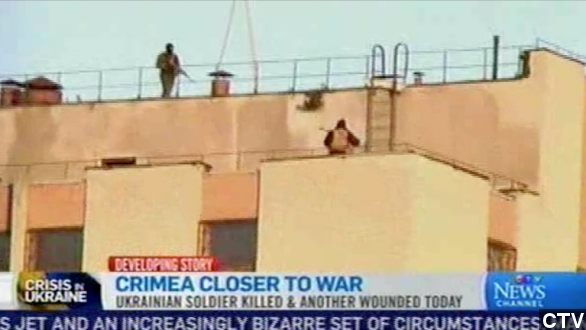 SMS
Ukraine Reports Russian Attack, 1 Soldier Killed
By Laura Heck
By Laura Heck
March 18, 2014
Ukraine says one of its own soldiers was shot and killed during a raid by Russian troops in what could be a turning point for the Crimean crisis.
SHOW TRANSCRIPT

The first military death in Crimea during the Ukrainian-Russian conflict is being reported Tuesday by the Ukrainian military after an army base was attacked.

​​"Ukraine's defense ministry says one of its soldiers has been killed in a raid on a military base in Crimea, an attack labeled a 'war crime' by the country's interim prime minister." (Via BBC)

Another soldier was shot and wounded in the attack and was taken to a local hospital. It's not clear who is responsible for the raid, but it marks a major turning point in the conflict over Crimea. (Via Time)

"As a result of this particular incursion, we now have the prime minister of Ukraine Arseniy Yatsenyuk saying that Ukrainian soldiers can and should defend themselves." (Via CTV)

Immediately after the incident, Ukraine's interim prime minister said this act shows the conflict has officially turned "from a political to a military stage," that quote coming from Deutsche Welle.

Until this point, Ukrainian troops in Crimea had been told not to engage in military action with incoming Russian troops. Now they are instructed to respond with live fire. (Via KNBC)

The Washington Post has a statement from Ukraine's defense ministry saying the troops that attacked the base "were wearing military uniforms of the Armed Forces of the Russian Federation." However, there's been no independent confirmation the militants were acting in official Russian capacity or if they were just volunteers.

Another important factor here is the timing of the attack.

"The killing is on the very same day that Russia's president declared Crimea part of the Russian Federation." (Via CNN)

Earlier Tuesday, Putin signed a treaty that brought Crimea under Russian control. In a previous Newsy story, we mentioned how Putin saw that as "correcting a historical injustice."