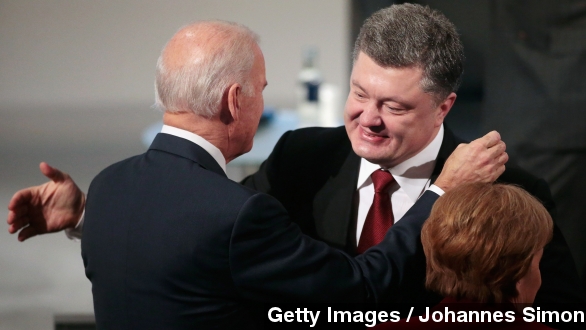 SMS
Ukraine Peace Summit Planned, Despite U.S. And Europe Divide
By Sebastian Martinez
By Sebastian Martinez
February 8, 2015
A handful of world leaders are throwing their weight behind a peace agreement for Ukraine, as the U.S. considers sending weapons to help the fight.
SHOW TRANSCRIPT

Some powerful world leaders are pushing for peace in Ukraine, but they seem a little divided on how to go about it.

German Chancellor Angela Merkel and French President Francois Hollande have argued the peace agreement Ukraine, Russia and separatist rebels drafted in September in Minsk, Belarus, is the way to go. (Video via RT)

Merkel in particular has called for an end to the fighting and has spoken out against plans to provide weapons to the Ukrainian military. (Video via ODN)

"The problem is that I cannot see any situation in which a better equipped Ukrainian army makes such a big impression on president Putin that he thinks he would lose militarily. That's just the way it is," Merkel said. (Video via Deutsche Welle)

The U.S. is considering providing lethal aid to Ukraine, and Defense Secretary nominee Ashton Carter spoke to that effect at a confirmation hearing last week. (Video via C-SPAN)

"I incline in the direction of providing them with arms including, to get to what I'm sure your question is, lethal arms," Carter told Sen. John McCain.

That seems to set up conflicting strategies between the U.S. and European leaders, but State Department deputy spokesperson Marie Harf denied there was a split. (Video via U.S. Department of State)

Merkel and Hollande talked with Russian President Vladimir Putin as well as Ukrainian President Petro Poroshenko over the phone Sunday to push for the establishment of a demilitarized zone in Eastern Ukraine.

That buffer zone would be 30 to 40 miles wide along the current front lines, which would be a step up from the original 20 mile buffer zone originally established during the Minsk peace talks. (Video via BBC)

That zone saw incursions from both sides in the months following Minsk, until the pretense of a ceasefire was ultimately abandoned and outright fighting resumed, prompting this month's talks. (Video via Radio Free Europe / Radio Liberty)

Following Sunday's phone conference, Germany announced a summit scheduled for Wednesday in Minsk to further hash out the details of a peace plan. The conflict in Ukraine has already claimed more than 5,000 lives.